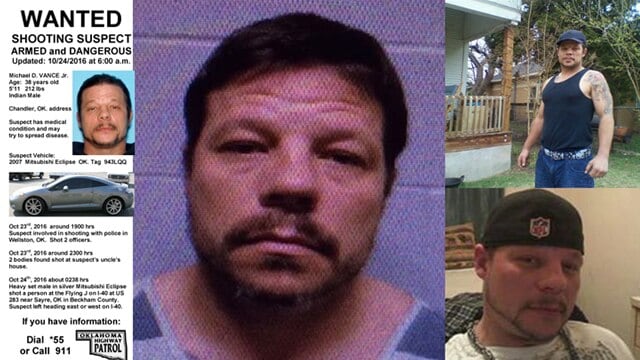 Michael Vance, 38, is wanted for the shooting of six people. Two victims are police officers, and two others are dead. (Photo: KWTV)

Oklahoma authorities are searching for a suspect who went on an hours-long rampage Sunday evening and into Monday, shooting as many as six people and streaming parts of his escape on Facebook Live.

During the rampage, authorities say Michael Vance, 38, killed two people and injured four others, including two police officers. It started in Wellston, about 35 miles northeast of Oklahoma City.

According to local reports, Vance opened fire with an AK-47 on two officers as they responded to a call of shots fired around 6:30 p.m. One officer was hit in the foot and the other in the leg, but they both returned fire and struck Vance at least twice. Yet, Vance and an alleged accomplice stole their police car and drove to a nearby mobile home park. There, Vance shot a woman and stole her vehicle .

Authorities say they arrested Vance’s accomplice, and that both officers were treated and released from the hospital. The woman, however, refused treatment.

Early Monday morning, police responded to reports of a shooting at a truck stop. They think Vance is the likely shooter. The victim was shot in the thigh and taken to the hospital.

In their investigation, authorities found the bodies of two of Vance’s family members at a home in Luther, Oklahoma, killed allegedly as part of his spree.

At some point during the mayhem, Vance opened up in a series of Facebook Live videos, where he told viewers “Letting y’all know, look, this is real.” He then pointed the camera at a long gun in the passenger seat.

A warrant has been issued for Vance’s arrest. According to local media, Vance was recently released from jail for child sexual assault charges stemming from abuse of a 15-year-old girl.

According to a statement by the Lincoln County Sheriff’s Office, Vance is driving a silver Mitsubishi with a blue roof. He is described as Native American and he’s also infected with AIDS, which authorities say he is willing to spread. Vance is considered armed and extremely dangerous.