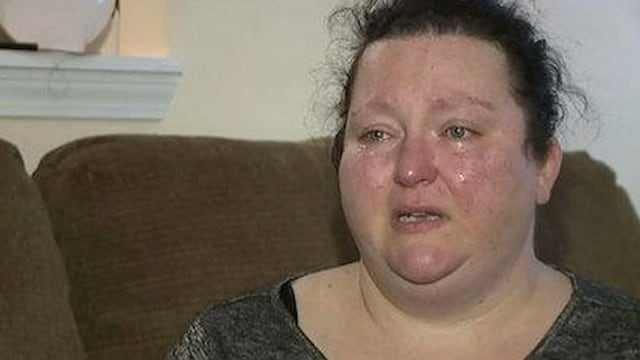 Jackie Alexander said in the eight years she’s lived there, she has always felt comfortable walking outside at any time of the day or night, but that sense of security is now gone. (Photo: Fox 59)

The victim of a terrifying home invasion in Bargersville, Indiana, early Friday morning fought back against her attacker, but he wasn’t ready to back down until after she was able to retrieve her husband’s handgun.

Jackie Alexander’s husband was at work and she was home alone when she took her dog outside around midnight, but while she was still outside, she noticed a strange man walk down the sidewalk and into her yard.

Alexander said she told the man to stop, but he didn’t. So she went back inside, but the man followed her and forced his way into her home.

“He’s in my space. It was clear that he had intent,” Alexander later told reporters, “I don’t know if his intent was money or rape or murder. I just knew that he had very bad intentions, and I was scared.”

Alexander fought with the man in her living room, but the fight soon moved down the hall and eventually into the bedroom. At that point, the man forced Alexander onto the bed and tried to remove her clothes.

Alexander tearfully recalled how she could not imagine laying there with the suspect in control of her, so she fought back and kicked him.

“I kicked the hell out of him,” she said.

That move gave Alexander a chance to grab a nearby gun that belonged to her husband. She said she aimed the weapon at the intruder and fired twice. Alexander’s attacker then backed down and ran away.

Authorities do not believe the man was struck by the bullets, but evidence collected at the scene indicated the man was black or Hispanic.

Although very shaken up over the incident, Alexander was not reported to be physically harmed.

“If I didn’t have a gun, there was nothing but me underneath him, struggling to keep him from causing harm,” Alexander said.