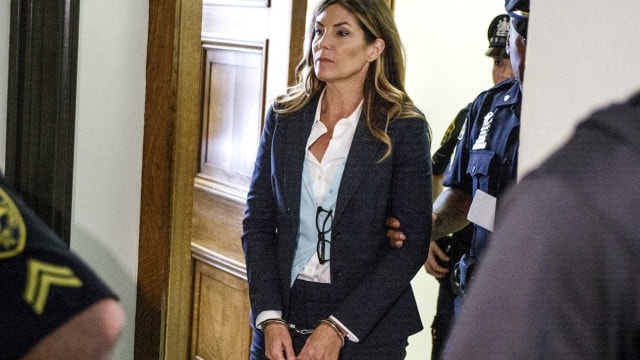 Kathleen Kane is led from the courtroom following sentencing. She was facing up to 24 years in prison, but was given 10 to 23 months and is out on bail pending appeal. (Photo: AP)

Kane, 50, was both the first woman and first Democrat elected to that office when she defeated her Republican opponent in 2012 in a narrowly decided race. A former Lackawanna County prosecutor, she worked for the 2008 Hillary Clinton presidential campaign and was endorsed by former President Bill Clinton on her own run.

Now, convicted of illegally leaking grand jury records and then lying about it, she was sentenced by Judge Wendy Demchick-Alloy on Monday to 10 to 23 months in prison, though she will remain free on bail pending appeal.

Kane, who resigned her positon in August, was installed in her post with the help of national gun control advocates.

“Kane received a perfect score on CeaseFirePA’s questionnaire,” noted the group in their endorsements. “In particular Kane has committed to a review of all concealed carry reciprocity agreements currently in place between Pennsylvania and other states, including Florida, and renegotiating or terminating those that do not meet Pennsylvania’s standards.”

Kane kept her promise and severed reciprocity with a number of states shortly after she was elected. Kane then added her name to a list of state attorneys general opposing federal right to carry laws.

When it came to Pennsylvania’s Act 192, which allowed member groups such as the NRA to stand in for individuals on lawsuits against local municipalities over gun control ordinances in excess of state law, Kane stood aside in 2014 when the law was itself challenged, declining to defend it.

The NRA has endorsed Republican state Sen. John C. Rafferty Jr. in his bid to move into Kane’s vacated office. Also vying for the job is Democrat Montgomery County Commissioner Josh Shapiro, who has much the same support from the same camps as Kane, including an endorsement from CeaseFirePA and $250,000 in funding from Bloomberg.

In a recent face-off between the two candidates, Rafferty referred to his effort against Shapiro as, “I am running against Kathleen Kane in a suit.”