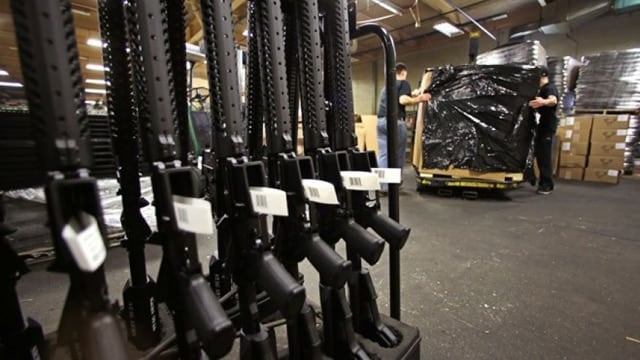 A rack of AR-15 rifles stand to be individually packaged as workers move a pallet of rifles for shipment at the Stag Arms company in New Britain, Conn., on April 10, 2013. (Photo: Associated Press)

A federal interim report of firearms manufacturing and exports indicates the industry barely picked up the pace in 2015.

Though the Bureau of Alcohol, Tobacco, Firearms and Explosives won’t release the final numbers until next year, preliminary data shows 9,051,126 firearms were manufactured nationwide last year — an increase of just 500 over 2014 and still 16.5 percent lower than the 28-year high of 10.8 million in 2013.

Exports are also down 17 percent from 2014, according to the ATF.

Despite the apparent stagnation in manufacturing, background checks for firearm sales hit an all-time high of 23.1 million in 2015.

This year, applications processed through the FBI’s National Instant Criminal Background Check system remain on track to eclipse 2015, with six out of the last nine months raking in more than 2 million checks each. The system has processed 19.8 million checks in 2016 so far.

Industry analysts use NICS data as a barometer for gun sales across the country. Total background checks for the month of October will be released next week.