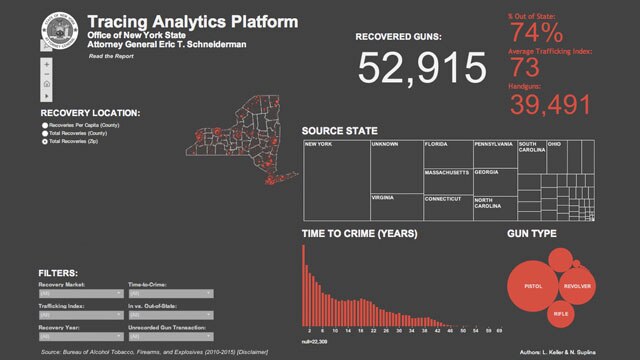 A report released Tuesday points to an influx of guns into New York from states with weaker gun laws.

According to a state attorney general’s office report, law enforcement agencies in New York state recovered 52,915 guns from 2010 to 2015. Of those guns with a known source, nearly three quarters, 34,344 guns, came from outside New York. The report says nearly half of those 34,344 guns come from states with weak gun laws.

Six states — Pennsylvania, Virginia, North Carolina, South Carolina, Georgia and Florida — are along the I-95 corridor on the East Coast. A steady stream of firearms coming from these states has led to law enforcement dubbing the the interstate the “Iron Pipeline.”

“These states lack gun laws fundamental to preventing illegal diversion,” notes the report. “For instance, all but one of these states have no requirements  for background checks for private sales or at gun shows (Pennsylvania, and only for handguns). And all but one do not require a permit prior to a handgun purchase (North Carolina).”

The report notes that Ohio is also a large source of crime guns, though it doesn’t lie along the “Iron Pipeline.”

“The data makes one thing abundantly clear: New York’s strong gun laws are being undermined at every turn by lax laws in other states,” said New York Attorney General Eric Schneiderman in a statement. “It’s time for the federal government – and other states – to take common sense measures and ensure weak gun laws won’t continue to take the lives of New Yorkers.”

The report is called “Target on Trafficking, New York Crime Gun Analysis” and it’s the first of its kind in New York. The attorney general’s office analyzed data from the federal Bureau of Alcohol, Tobacco, Firearms and Explosives.

The end of the report offers policy recommendations, including universal background checks and closing the “gun show loophole.” It also urges lawmakers to make gun trafficking a federal crime, and suggests harsher punishments in New York for trafficking — between 25 years to life in prison.