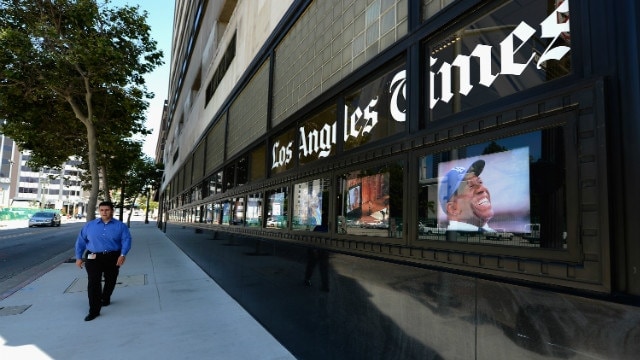 With no guns on the market that use microstamping, the Times notes, “Clearly, a nationwide requirement is needed to compel gun makers to adopt the identifying technology.” (Photo: CNN)

The largest metropolitan daily paper in the country this week fired off an editorial claiming the reason why microstamping isn’t in use is because of the gun industry — who vehemently disagree.

Up for debate is California’s 2007 law that requires new firearms sold in the state to have the capability to permanently stamp cartridge cases fired through the gun with an identifying mark. In effect, creating a serialized casing that could be tracked back to the gun that fired it.

Long dormant, the ballistics identification technology mandate — first advocated in the legislature by state lawmaker Leland Yee — took effect in 2013. As a result, California has since required such microstamping capability for each new model of semi-automatic handgun before it can be added to the state’s approved roster. With no gun maker in the country currently producing guns capable of fulfilling the mandated requirements, the roster has shrunk from 1,152 approved models of handguns to 770 today.

This, says the editorial board of the Times, is the fault of the gun industry.

“That has effectively negated California’s law; according to the state Attorney General’s office, there are no new models with microstamping technology on its list of handguns certified as safe for sale,” reads the editorial. “Clearly, a nationwide requirement is needed to compel gun makers to adopt the identifying technology.”

The Times argues that investigations relying on recovered brass with such stampings would give investigators a lead to pursue and  better allow them to link one gun to several crime scenes — without noting that modern forensics can often accomplish much the same goal through current firearm and toolmark examination techniques. The Bureau of Alcohol, Tobacco, Firearms and Explosives’ National Integrated Ballistic Information Network (NIBIN), through its Brasscatcher program, teams with state and local agencies to catalog and index recovered casings.

Conceding that as few as 54 percent of fired microstamped cases were readable in tests of the technology, the Times holds this is a good start, saying, “But even at the lowest success rate, a little more than half of the shell casings recovered from a crime scene could be traced to the unknown gun that fired them, which is a lot better than none.”

One glaring hole in the drive for microstamping of handguns, ignored by the editorial, is that the mandate makes exceptions for revolvers due to the nature of their design. According to the latest statistics from the ATF, some 744,047 revolvers were manufactured in 2014, the most recent year that data is available. This is the highest figure on record since 1988 and amounts to a more than two-fold increase since 2005.

The Times does recommend expanding the mandate, however, to include rifles, though rifles were used in few homicides nationwide — just 34 in California in 2015 as opposed to 263 killed with knives.

Finally, the editorial argues microstamping in and of itself will cut down on crime, as, in theory, it will make those with guns capable of marking their casings less likely to be passed from legal to illegal ownership.

“It helps separate criminals from law-abiding gun owners. But then, the gun lobby has never been susceptible to reason,” notes the Times.

The solution as offered by the paper, with a daily circulation of over 1.4 million: make microstamping a national law, which would spur innovation and adoption. While the subject has come up on Capitol Hill, it has tanked.

California’s microstamping requirement was challenged in court by firearms industry trade groups including the National Shooting Sports Foundation and Sporting Arms and Ammunition Manufacturers’ Institute, contending the tech behind the mandate is unreliable. Further, they hold the editorial misses the mark entirely.

“For the LA Times to suggest the industry is somehow conspiring to not complying with the law and foregoing lawful sales in the state defies logic,” Lawrence Keane, senior vice president and general counsel of the NSSF, told Guns.com on Tuesday.

Keane holds that in its current state, microstamping is dead in the water.

“This untested and unproven concept does not work reliably and can be defeated in mere seconds with a simple nail file,” he said. “All independent studies including by the National Research Council have concluded that this concept should be studied further and not mandated. Even the inventor and patent holder agrees. It is literally impossible for industry to comply with the requirements of the California law.”

Besides California, New York and New Jersey have made efforts to enact microstamping in recent years.