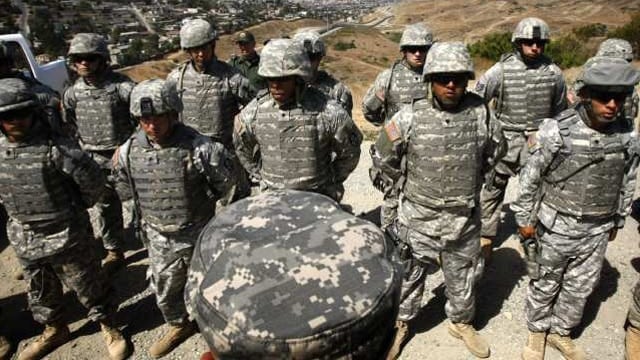 While the National Guard Bureau confirmed that every state was involved in making overpayments, the bonuses handed out in California far exceeded other states. (Photo: Los Angeles Times)

Recent investigations determined that the California National Guard – eager to find troops to send to Iraq and Afghanistan – mistakenly dished out enlistment and other bonuses, and now, the Pentagon is demanding nearly 10,000 veterans pay back some $30 million that they were given a full decade ago.

Faced with the country’s longest period of warfare, coupled with below-average enlistments in the volunteer force, the Guard began offering large, enticing bonuses for re-enlistment. The bonuses, which were supposed to be reserved for high-demand assignments, included both cash incentives that were paid upfront, and financial assistance for education. They were among the most generous in the nation’s history.

It was a huge mistake, and one the Pentagon is not willing to absorb, despite backlash, even from the National Guard’s own members.

“At the end of the day, the soldiers ended up paying the largest price,” said Maj. Gen. Matthew Beevers, deputy commander of the California Guard. “We’d be more than happy to absolve these people of their debts. We just can’t do it. We’d be breaking the law.”

So now, those who received the bonuses must either pay them back – upfront and in full – or face legal repercussions, including wage garnishments and tax liens. Likewise, those who do not – or cannot – pay the thousands back in one lump sum have interest generating on their payback balances, further adding to their financial hardships.

Christopher Van Meter, 42, of Manteca, California, is a former Army captain who was thrown from an armored vehicle turret after the vehicle detonated a roadside bomb. Van Meter was later awarded a Purple Heart, but now he must repay $25,000 in enlistment bonuses and an additional $21,000 in student loans.

“People like me just got screwed,” said Van Meter, who refinanced his mortgage in order to pay back the money.

“I feel totally betrayed,” said Haley, who served 26 years in the Army.

Haley’s husband and son also served time in the Army and her son lost a leg while in Afghanistan.

“They’ll get their money,” Haley said, “but I want those years back.”

Some have fought the Pentagon’s decision to demand the money, but it’s certainly not a short or easy process. Meanwhile, their balances continue to grow.

Army sergeant first class Robert Richmond reenlisted after a deployment to Afghanistan when he was told he would receive a $15,000 bonus as a special forces soldier. Richmond said the money gave him much-needed “breathing room,” but two years ago, Richmond received a letter from the California Guard stating that the $15,000 needed to be paid back.

According to officials, Richmond wasn’t eligible for the bonus because he served 20 years in the Army, but Richmond said there were breaks in his service and he actually only spent 15 years in service.

Richmond has thus far refused to pay back the bonus. He has gone through numerous appeals, all to no avail at this point, but nearly $5,000 in interest and penalties has been added to his original balance.

Furthermore, due to the outstanding balance, Richmond is unable to qualify for a mortgage so he can buy a home for his family.

“I signed a contract that I literally risked my life to fulfill,” Richmond said. “We want somebody in the government, anybody, to say this is wrong and we’ll stop going after this money.”

In response to backlash after the Los Angeles Times broke the story last week, the California Military Department offered a statement which noted, in part, they were unable to unilaterally forgive these debts, but they welcomed any laws passed by Congress that would. The Department said until that time, their “priority is to advocate for our Soldiers through this difficult process.”