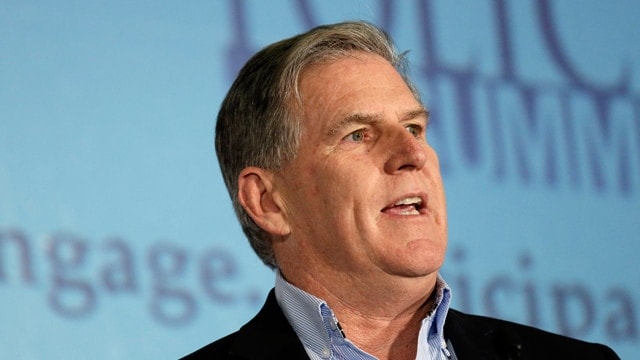 Steve McLaughlin has spent the better part of the last year distancing himself from the Patriot movement. (AP Photo/Elaine Thompson)

A man vying for a public lands chief post in Washington state is having second thoughts about supporting a protest of the arrest of two ranchers.

Republican Steve McLaughlin is fighting to be the Commissioner of Lands in Washington. Last fall, a state representative asked him to join a protest of the re-arrest of two ranchers who set fire to federal land. But little did he know, it would lead to Patriot movement support of his candidacy, something he now regrets.

“If an elected guy calls me on the phone and asks for my help, I’m gonna give it to him, I don’t care who it is,” McLaughlin told the Southern Poverty Law Center’s Hatewatch. “I believe in serving our community.”

On Dec. 11, 2015, McLaughlin’s name appeared on a Coalition of Western States press release that described “a literal, intentional conspiracy to deprive ranchers of their property rights throughout the west.” The document claimed that it intended to “once and for all restore management of public lands to the states where it belongs.”

Before he knew it, members of the Patriot movement started supporting him.

“I definitely regret being pulled into that orbit,” McLaughlin told Hatewatch. He says he wants nothing to do with their warped conspiracy theories or their anti-federal lands agenda. “That’s not who I am,” he said.

He said he’s completely opposed to the idea of of returning federal lands to the states. He said citizen militias are illegal and he called members of the Bundy family, who have been significant figures in the movement, “domestic terrorists.”

McLaughlin said he’s been campaigning statewide during the last year and has been somewhat successful in emphasizing his mainstream credentials and distancing himself from the Patriot movement.

McLaughlin served in the Navy for 25 years, and supports opening more state lands to recreational activities. His opponent, Democrat Hilary Franz, is an environmental attorney.

The lands commissioner in Washington is in charge of the Department of Natural Resources, which manages 3 million acres of state lands.