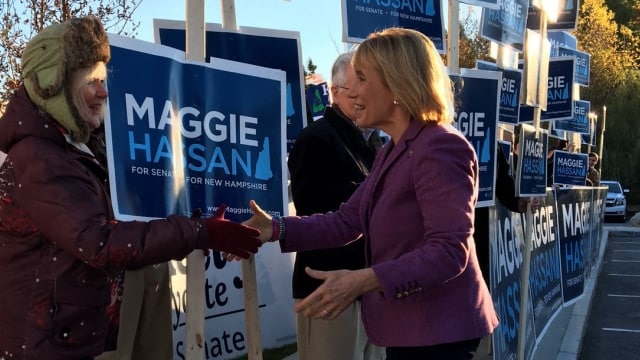 After vanquishing a series of pro-gun bills while in office, more than half of Gov. Hassan’s U.S. Senate campaign contributions are coming from out of state gun control advocates. (Photo: Maggie for NH)

The Washington, D.C.-based Brady Campaign announced its endorsement of Hassan via social media Tuesday, noting her promise to expand background checks to include all gun sales and support of so-called No Fly/No Buy legislation.

As governor, Hassan vetoed the New Hampshire’s popular constitutional carry measure last year and doubled down on the proposal this session as well while directing courts in the state to report the names of some with mental illnesses to a federal database of prohibited gun possessors.

While former New York Mayor Michael Bloomberg’s Everytown officially endorsed only one candidate this election cycle — Hillary Clinton for President — the group has contributed $27,548 in the effort against Ayotte, according to the New Hampshire Secretary of State’s office.

However, that pales to the $4.7 million spent targeting Ayotte by Bloomberg’s Independence USA PAC, as disclosed by the Center for Responsive Politics. The PAC, funded solely by the billionaire philanthropist and media mogul, is also spending big against Donald Trump and for embattled anti-gun lawmaker U.S. Sen. Pat Toomey of Pennsylvania.

Americans for Responsible Solutions, the PAC set up by former U.S. Rep. Gabby Giffords, has chipped in some $2.5 million of their own against Ayotte to benefit Hassan, primarily spent on ads attacking the senator on her voting record against expanded background checks. The amount is by far the largest contribution by the gun control group this cycle and, when added to the funds from Bloomberg, account for over half of Hassan’s $13 million campaign financing.

Giffords and husband Capt. Mark Kelly were in New Hampshire last December to found a local organization, the “Granite State Coalition for Common Sense,” with a mandate to expand background checks to include most private gun transfers and increased reporting of mental health records by the state to the Federal Bureau of Investigation’s National Instant Criminal Background Check System.

Smaller groups, for instance Gays Against Guns, have also come out vocally against Ayotte with their own ads.

While the ARS ad slams Ayotte by stating, “She stands with the Washington gun lobby– they fund her campaign,” of the $17 million raised by the junior senator from the Granite State, only $48,100 is from the National Rifle Association and $25,000 from Safari Club International. Most of Ayotte’s money is from Republican senatorial PACs.

According to the latest aggregate polling data from Real Clear Politics, Hassan and Ayotte are in a statistical dead heat.

Democrats need to retain all of their seats in the Senate and pick up four from the GOP to change the polarity of the chamber in November.