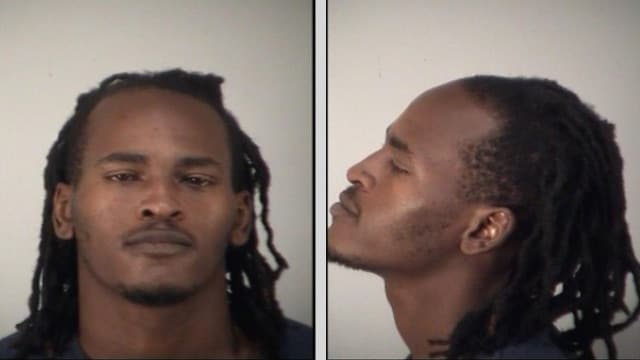 Lloyd Maurice Carter, 26, has 18 arrests under his belt, the most recent for being a felon in possession of a firearm. (Photo: Lake County Sheriff)

A 26-year-old Mount Dora man with a lengthy criminal record was arrested by authorities in Lake County on Sunday after they found him with a rifle with a scratched out serial number and a clown mask.

Arrested was Lloyd Maurice Carter around 11:00 p.m. after he rolled through a stop sign then refused to stop for a Lake County deputy sheriff and fled, ultimately crashing his vehicle into a fence and being caught at the end of a foot chase.

As reported by the Orlando Sentinel, Carter, a felon with a previous record, wrestled with a deputy and his K9 and, as the officer reached for his sidearm, threw away a Mossberg .22 rifle that had its serial number defaced– termed an “assault rifle” in media reports. (Come on, Florida, you are better than that).

Authorities also found a clown mask on the front seat of his vehicle, leading them to speculate he was planning a robbery.

“In my opinion, we may have stopped a possible robbery from happening when you look at the totality of the circumstances with the gun,” Lake County Sheriff’s Sgt. Fred Jones told the Sentinel.

The local Fox affiliate doubled down on the “assault rifle” in their report, attributing it to Jones.

“The assault rifle was in his possession,” said Jones. “They also found a clown mask in the seat, which leads us to believe that maybe he was going to commit a crime at the time he was stopped.”

Public records show that Carter has been booked at the Lake County Jail at least five previous times since 2010. Jones told FOX35 that Carter had been arrested 17 times.

He is currently being held on a $42,000 bond and his arraignment is set for November 21.