Question 1: Which side is law enforcement really on? 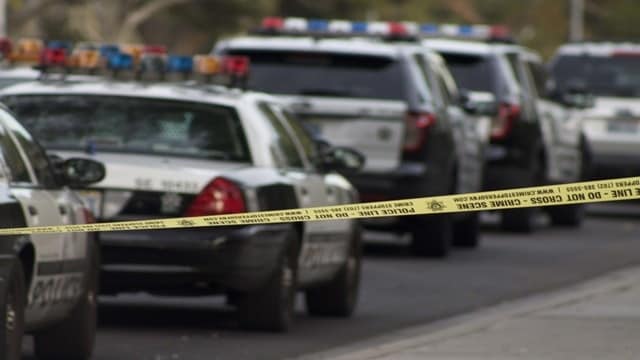 The two key players in Nevada’s pricey battle over the background check ballot initiative continue fighting for the allegiance of law enforcement officials across the state.

But whose side is law enforcement really on? It depends on who you ask.

Bloomberg has dumped nearly $3.5 million of his own cash into passing the ballot measure come Nov. 8 and funneled another $9.5 million to Nevadans for Background Checks through donations from Everytown. New ads drop almost weekly from the campaign featuring a different police officer or public safety official imploring residents to approve the measure.

In the other corner, Nevadans for Freedom, funded entirely by the National Rifle Association, has poured $4.5 million into its fight against Question 1 and gathered the support of many of the state’s top officials along the way, including Republican Gov. Brian Sandoval and 16 out of 17 of the state’s sheriffs.

Jennifer Crowe, spokeswoman for Nevadans for Background Checks, argues, despite the opposition’s high-profile support, the numbers are still on their side.

“Thousands of law enforcement officers across the state support Question 1 because they believe it will improve public safety and save lives,” she said. “Sheriffs from Nevada’s rural counties don’t have the same issues as law enforcement in Las Vegas or even in Reno where criminals are using the loophole to get guns in sales that don’t require background checks. There are cases on record where if Question 1 had been the law, crimes and even murders could have been prevented. That’s why the vast majority of Nevadans and many in law enforcement are voting yes on Question 1.”

At a press conference held at the Nevada Association of Public Safety Officers headquarters in Henderson, Nevada, on Tuesday, the drumbeat of supportive officials promising a “safer” Nevada continued.

“Question 1 will make a difference,” said Al Salinas, a retired Las Vegas Metro Deputy Police Chief. “That’s why Question 1 has such broad support from the law enforcement community and domestic violence prevention advocates. As Nevadans, we must all do our part to help make our state safer.”

Ray Steiber, a retired Homicide lieutenant for the Las Vegas Metro Police Department, said he witnessed “first-hand what happens when guns end up in the wrong hands.”

“We can and we must do better,” he said during Tuesday’s press conference.

The Nevada Association of Public Safety Officers, Las Vegas Fraternal Order of Police, and the Nevada Chapter of the National Latino Peace Officers Association have also endorsed the initiative.

C.G. Gates, editor of the Nevada Carry blog, argues it’s hard to ignore how many of those endorsements come from retired and lower-level officials.

“Question 1 sounds good because we all support background checks, but Question 1 is a sloppy, legal disaster,” said Nevada Attorney General Adam Laxalt in the latest Nevadans for Freedom ad. “It’s poorly written and could put honest Nevadans in jail.”

The lone holdout, Clark County Sherriff Joe Lombardo, said in July he will not offer a public endorsement of Question 1, instead preferring to remain neutral.

His colleagues, however, say the measure would overburden police resources, criminalize the most trivial behaviors of law-abiding gun owners — like loaning or selling a gun to a friend — and do nothing to keep firearms “out of the wrong hands.”

“If passed, Nevada’s gun control laws on private transfers would be even more restrictive than the outrageous laws in California,” he said. “The measure would force anyone who loans or sells a firearm to a friend, or even a cousin, to go through a government background check, paying a fee each time. If sellers don’t jump through all these mandates, they could face up to a year in jail and a fine of up to $2,000. A second offense, and you could be a felon facing up to five years in prison and a $10,000 fine. All the while, actual criminals are free to go about their criminal business, as they ignore the law.”