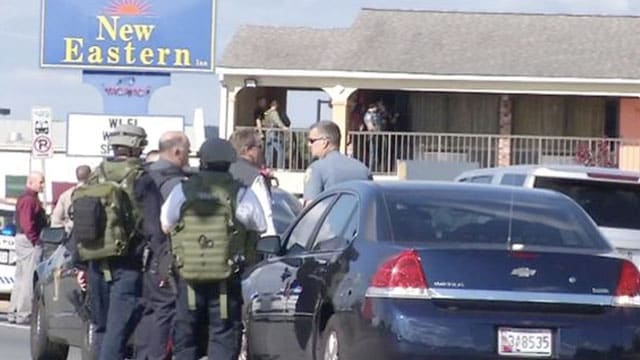 Police in northeast Maryland shot and killed two fugitives at a motel Tuesday morning after they pointed BB guns at the officers.

Police thought the BB guns were actual handguns when they knocked on their motel room door Tuesday just before 10 a.m. in Elkton, Maryland. Officers demanded they surrender, but the man raised a BB gun and police opened fire. Seconds later, a woman also pointed a similar weapon at police, and she was also shot. Both were pronounced dead at the scene.

Police say Brandon Jones, 25, and Chelsea Porter, 25, were wanted on warrants from Delaware State Police for a host of gun and drug charges.

Three officers with the Cecil County Sheriff’s Office fired their weapons during the incident and all of them have been placed on administrative leave. A Maryland State Police trooper also fired shots, though it’s unclear how many. None of the officers were injured.

The shooting prompted a large police response, and reporters allegedly saw a body on the balcony.

Delaware State Police asked Maryland State Police for help in apprehending the fugitives after they say Jones fired a gun into the air during an incident on Oct. 18 after threatening to shoot someone.

Elkton is about 60 miles northeast of Baltimore.