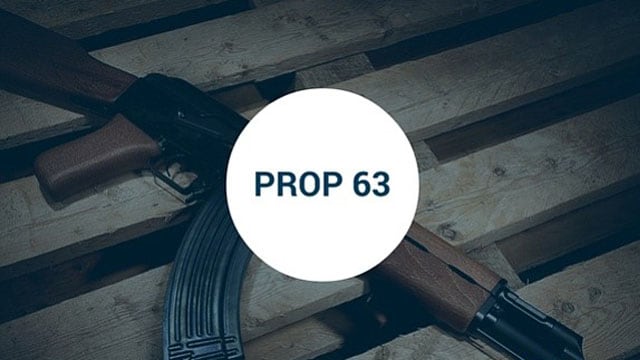 Voters will decide whether to approve Proposition 63 on Nov. 8. (Photo: California Counts)

A ballot initiative in California looks to go a step further on a bullet background check law already passed by the state’s legislature in May.

Some of the major bullet points of Proposition 63 have already been voted on by California lawmakers and signed by the governor. The law is set to take effect in January 2019. But Prop. 63 adds more red tape to one of the processes getting the most attention — the bullet background check.

“I’m fighting to pass Prop. 63 because it will, without question, reduce gun violence and save lives,” he said.

But the law and Newsom’s Prop. 63 would see bullet background checks carried out in vastly different ways.

The legislation would make Californians provide an ID card and have an immediate background check when trying to buy ammunition. The check would happen in a database of people who can’t own guns.

Prop. 63 would make Californians get a four-year permit from the state’s Department of Justice. The DOJ would run a background check and have 30 days to approve the permit. Those applying would have to pay $50 and provide identifying information including a fingerprint. That information would go into a new database. Then people would have to show the permit each time they went to buy ammunition. If voters pass the initiative, it would take effect on Jan. 1, 2018.

The NRA urges Californians to vote against the proposal.

“Prop 63 is a very bad proposal that Lt. Gov. Gavin Newsom wants you to believe will keep guns and ammunition out of the wrong hands,” writes Kimberly Rhode for the NRA. Rhode is a trap and skeet shooter, and a six-time Olympic medal winner. “Only bureaucrats would believe that criminals and terrorists would jump through these hoops to buy ammunition,” she said.

Other provisions in Proposition 63 include the prohibition of large-capacity ammunition magazines, a measure already passed by the legislature, a requirement that California authorities share data with the FBI so California felons can’t buy guns in other states, a requirement that lost or stolen firearms be reported within five days, and several other restrictions.

“Anyone who sincerely thinks gun violence is a problem won’t hesitate to support Prop. 63,” he said.