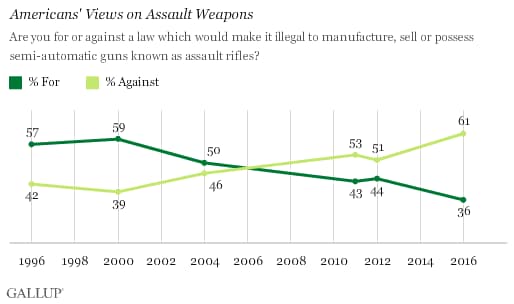 A poll released this week by Gallup found the lowest support of a ban on firearms classified by some as “assault weapons” in the 20 years they have asked the question.

When asked, “Are you for or against a law which would make it illegal to manufacture, sell or possess semi-automatic guns known as assault rifles,” the pollster found just 36 percent of respondents were in favor. This is down from 44 percent in 2012 and the high of 57 percent who liked the concept in 1996 when Gallup first asked the question.

In the latest survey, part of Gallup’s 2016 Crime poll, a record 61 percent of respondents were opposed to the idea.

“Perhaps paradoxically, opposition toward a ban has increased against a backdrop of multiple mass shootings and terrorist attacks in which the perpetrators used assault rifles,” said the organization, using semantically incorrect terminology for the semi-automatic weapons. “These guns were used in high-profile incidents, including the terrorist attacks in San Bernardino, California, and Orlando, and the mass shootings in Aurora, Colorado, and Newtown, Connecticut.”

Gallup found that in the past two decades support for bans on such guns over their largely cosmetic features has fallen among both Democrats and Republicans. In the latest poll, 50 percent of self-identified Dems were in favor of a ban, down from 63 percent in 1996. Likewise, 20 years ago half of Republicans supported a ban, whereas today only 25 percent do so.

At the time of the question’s debut, the federal assault weapon ban was two years old. The ban expired in 2004 but seven states including New York and California have local prohibitions still in place.

In 2014, on the 20th anniversary of the federal assault weapon ban’s enactment, sponsor U.S. Sen. Dianne Feinstein, D-Calf., contended it worked and should be resurrected.

“I continue to believe we should reinstate the ban on assault weapons,” she said in a statement. “An assault weapons ban will not end all gun violence, but it will reduce gun murders, specifically mass shootings. If one of the lives saved is your child or your husband, your sister or your parent, that makes all the difference in the world.”

Fact checker ProPublica followed up on Feinstein’s remarks with an assertion that the ban had little to no effect on crime. Nonetheless, last year House Democrats introduced a renewed federal ban that currently has 149 partisan co-sponsors but has been frozen in committee.

Gallup surveyed 1,017 adults aged 18 and older during phone interviews conducted Oct. 5-9 in all 50 states and the District of Columbia, with a 4 percent margin of error. Gallup selects landlines and cellphones using random-digit-dial methods.