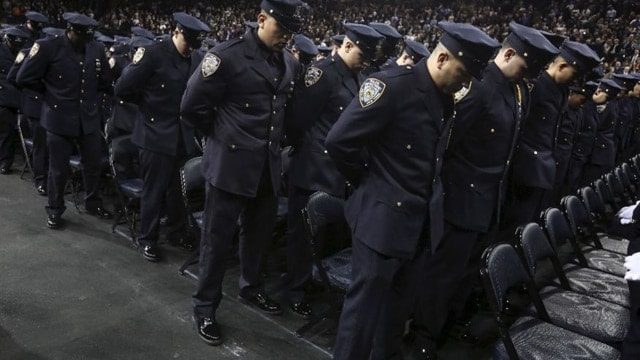 A Gallup poll released Monday shows 76 percent of Americans “have a great deal of respect” for the police — just one point behind the question’s 1968 record high of 77 percent.

Justin McCarthy, a Gallup analyst, says respect for law enforcement surged 12 percent over 2015, despite ongoing civil unrest over police-involved shootings of unarmed civilians that have spawned violent protests and retaliatory attacks on law enforcement across the country.

“The sharp increase over the past year in professed respect for local law enforcement comes as many police say they feel they are on the defensive — both politically and for their lives while they are on duty — amid heated national discussions on police brutality and shootings,” McCarthy says in an analysis published Monday.

McCarthy notes the 2015 murder of New York City police officer in Harlem, which prompted then-Police Commissioner Bill Bratton to declare “the U.S. has fostered ‘an anti-police attitude that has grown’ and that the national dialogue on police-community relations needs to discourage individuals who ‘exhibit anti-police behavior or attitudes.’”

Bratton isn’t the only law enforcement official to express concerns about growing hatred toward police officers.

In May, Louisiana became the first state in the country to extend hate-crime protections to law enforcement and first responders. Other states, McCarthy said, are considering similar bills.

“It’s unclear whether the spike in respect for police will have staying power or if it reflects mostly a reaction to the retaliatory killings against police officers last summer,” he said.