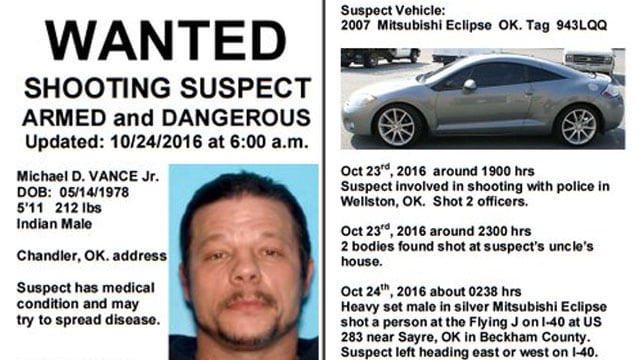 The wanted poster for Michael Vance, who’s been on the run in Oklahoma for five days. (Photo: Oklahoma Highway Patrol)

Authorities in Oklahoma on Thursday are still looking for a man wanted in connection with a deadly, multi-county rampage.

Federal investigators are now helping to find Michael Vance, 38, as the search enters its fifth day. Vance is suspected of shooting six people in all — two of them died, and two others were police officers. He used an AK-47 during his rampage, and is considered armed and extremely dangerous.

On Wednesday, investigators revealed that Vance had a hit list, and was targeting as many as eight more people. Oklahoma County Sheriff John Whetsel told The Oklahoman that Vance wanted revenge against those who accused him of child sex abuse. Prior to the rampage, Vance had been in jail for sexually abusing a 15-year-old girl.

The rampage started Sunday when police responded to a call of shots fired. Vance shot both officers during the shootout, and police fired back, hitting him at least twice. Officer Jim Hampton was one of the officers in the shootout. “He fell to the ground again, laid there for a few minutes, got back up. The firefight was on again,” Hampton told KOCO.

After the shootout with police in Wellston, Oklahoma, on Sunday, Vance stole a police car and drove to a mobile home park. There, police say he shot a woman and stole her car. Then he drove to Luther and killed his relatives. Police say injuries to those relatives were consistent with an attempt to sever their heads.

Vance is also suspected of shooting a man at a truck stop early Monday morning in an attempted carjacking. That happened in Sayre, near the Texas border.

Police believe Vance is driving a silver 2007 Mitsubishi Eclipse. They say he has HIV/AIDS and is willing to spread it.

The Las Vegas Metropolitan Police Department tells KTNV they think Vance could be headed to Las Vegas, more than 1,000 miles from where the rampage began.

“He could very well be headed here,” retired Las Vegas Metropolitan Police Dept. Sgt. Randy Sutton said. “There is a lot of tracking going on and my guess is he is going to meet a violent end.”