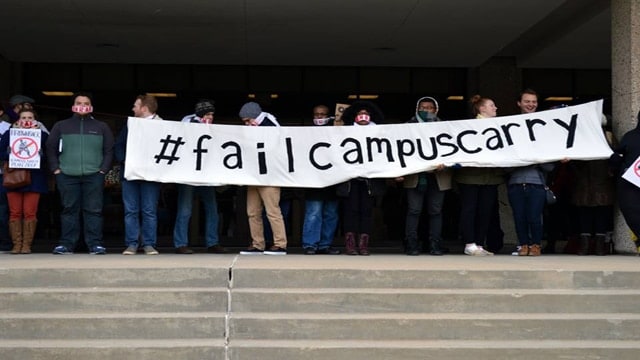 Students and staff from across Kansas gather to silently protest campus carry on Feb. 8, 2016 (Photo: Mercedes Lucero/Kansas Coalition for a Gun Free Campus/Facebook)

The university submitted its draft weapons policy to the State Board of Regents earlier this month. The board anticipates discussing the policy at its November meeting.

In the meantime, university students tell KMBC 9 News the new policy has many of them considering transfers.

“I’ve actually been looking at different schools and I know a lot of students have been,” Abigail Samuelson, a university student, told the news station.

Paul Shumaker, a professor who has taught at the university for 45 years, also admitted he would be resigning because of the new policy, the station reports.

“I am 99 percent sure that I would not come back,” he said. “I really don’t want my career to end by policing guns in the classroom.”

It’s not the first time Kansas college students have banded together to protest campus carry laws. Some 75 students and staff staged a demonstration in February on the steps of Wescoe Hall at the University of Kansas Lawrence campus to drum up support for two state bills that would have exempted college campuses from permitting concealed carry.

“We don’t feel that it’s conducive to academic discourse,” said graduate student and Kansas Coalition for a Gun Free Campus Co-President Meagen Youngdahl in an interview with KSHB 41 News. “The mere presence of firearms or perceived presence of firearms creates an environment of fear and intimidation that makes it impossible to have real open discourse.”