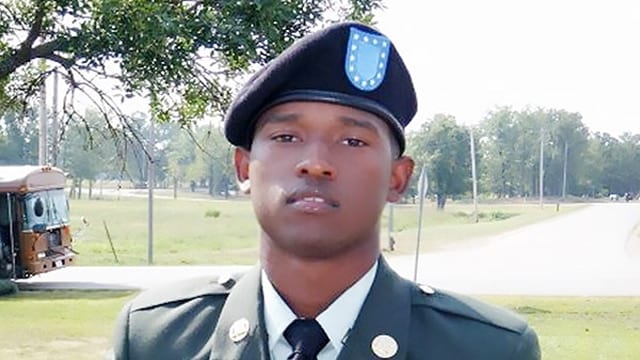 Mohamed Bailer Jalloh, 27, of Sterling, Virginia pleaded guilty Thursday to charges of attempting to provide material support to the Islamic State of Iraq and the Levant (ISIL), aka ISIS.

The Department of Justice said Jalloh admitted he began plotting an attack — similar to the 2009 Fort Hood shooting that killed 13 and wounded 32 others — with an overseas member of ISIS he met while visiting Nigeria last year.

Jalloh, a former soldier in the Virginia Army National Guard, told authorities he became radicalized after listening to the online lectures of Anwar al-Awlaki, a deceased leader of Al-Qaeda in the Arabian Peninsula.

In court documents, Jalloh explained that Aulaqi said “it was a duty of every able Muslim to resist the American presence and activity in Iraq and Afghanistan.”

Jalloh, a naturalized citizen, was born in Sierra Leone in September 1989 and identified as a Muslim, according to court documents.

“Attempting to provide material support to terrorists is a very serious crime,” said U.S. Attorney Dana J. Boente for the Eastern District of Virginia. “Jalloh attempted to help facilitate what he believed would be a terrorist attack here in Virginia. The FBI once again displayed their investigative expertise and commitment to keeping our citizens and communities safe from violent extremists. National security remains the top priority of this office and we will continue to work with our law enforcement partners to investigate these cases and prosecute those involved to the fullest extent of the law.”

Authorities said Jalloh returned to the United States in January after a six-month trip through Africa and continued communicating with his ISIS contact online. He bought a Glock 19 9mm handgun the month after he returned, according to court documents.

In March, the ISIS member arranged for Jalloh to meet with an FBI informant both men believed to be a fellow terrorist sympathizer. During that meeting, federal authorities said Jalloh bragged about his marksmanship, praised the gunman who killed five soldiers in a July 2015 terrorist attack in Chattanooga, Tennessee, and said he “thought about conducting an attack all the time.”

Court documents indicate Jalloh also expressed doubt about participating in an actual attack, but wanted to at least provide monetary support and guns for the plot.

Two months later, authorities said Jalloh pressed the informant for a timeline on their planned attack and suggested choosing the month of Ramadan would be “100 percent the right thing.” He gave the informant a $50 gift card and a prepaid cash transfer of $500 to send to the informant’s overseas ISIS contact.

In June, Jalloh tried to buy firearms, including an AK-47, for the attack at several dealers in North Carolina, but said in court documents at least one seller refused to carry out the deal. He then bought a rifle from a gun dealer in northern Virginia on July 2. Authorities said the dealer rendered the rifle “inoperable” before selling it to Jalloh. FBI agents arrested him the next day and seized the weapon.

“Mohamed Bailor Jalloh purchased a weapon following multiple attempts to procure assault rifles and handguns, believing they would be used in an ISIL-directed attack on U.S. soil,” said Paul Abbate, the assistant director in charge at the FBI’s Washington D.C. field office. “Jalloh also provided money on multiple occasions to support ISIL after attempting to join the terrorist group. The FBI and our partners within the Joint Terrorism Task Force are dedicated to preventing any and all acts of terrorism and relentlessly pursuing and disrupting anyone who poses a risk of harm directly or by providing material support to a terrorist group.”

Jalloh’s family members believe he was “manipulated by the FBI informant” and his statements were “mischaracterized,” according to a July report from The Intercept.

“He is just another Mohamed that got set up,” his brother Chernor Jalloh told The Intercept. “He sympathizes with the oppressed abroad. … The FBI used his love for those being oppressed against him by inciting him in all manners that they deemed fit.”

The department says Jalloh faces a maximum penalty of 20 years in prison. His sentencing is scheduled for Feb. 10, 2017.