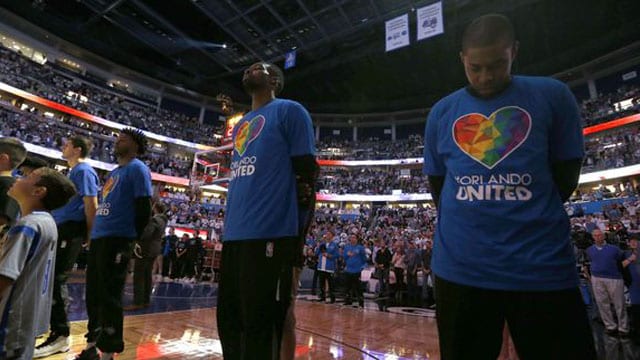 In their season opener Wednesday night, the Orlando Magic raised a banner honoring the victims of the Pulse nightclub massacre.

The banner has the number 49, commemorating the number of lives lost, and the words “Orlando United.” It was raised to the rafters and a giant American flag was unfurled by first responders during the national anthem. The emotional ceremony also saw players and fans hold a moment of silence just before tipoff.

The banner will hang in the rafters at the Amway Center. On the back of the flag is each victim’s name.

“We think part of the healing process for our community is making sure we don’t forget,” said Magic president Alex Martins. “And we felt it was most appropriate that we do it on opening night, so it receives the proper recognition and exposure — but also gave the greatest number of our fans the opportunity to recognize and remember.”

Some survivors were at the game Wednesday night, and so were family members of those killed. An Orlando police officer sang the national anthem, and Brandon Parsons sang a song dedicated to the victims.

“We are one community, one family and one Orlando,” said team announcer Paul Porter.

Omar Mateen killed 49 people and injured dozens more at the Pulse nightclub on June 12 of this year. The massacre lasted three hours, but ended when SWAT team members entered the building and killed him.