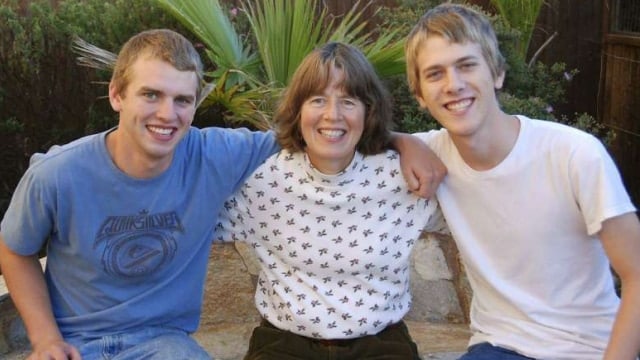 Andrew Wiegardt, left, and Nick Wiegardt pose with their mother, Kirsten Englund, who was killed and set on fire in 2013 by a stranger at a highway rest stop. (Photo: Andrew Wiegardt via AP)

A woman who transferred guns under her name to a son who was a prohibited possessor, later used by him in a murder, has settled with the victim’s family and joined in a suit against the firearms dealers.

In 2013, Jeffrey Boyce, 30, of North Bend, Ore., shot and killed 57-year-old Kirsten Englund at a highway rest stop. Boyce then drove to California in an attempt to seek political asylum at the Russian Consulate in San Francisco, but was arrested after a car theft and hanged himself in jail.

Englund’s family sued Diane Boyce, the killer’s mother, in Multnomah County Circuit Court, arguing that he bought two handguns from J&G Sales, an online firearms retailer, as well as an AK-47-style rifle from a Minnesota gun store, but she picked up the shipped guns for him at an Oregon pawn shop, World Pawn Exchange, under her name as her son was barred from firearms ownership.

Now, as reported by KVAL, Boyce has settled with the family for $400,000 and has agreed to testify in a suit against the dealers.

“My mother was murdered by a man who should never have been able to get his hands on a firearm,” said Andrew Wiegardt, one of Englund’s sons. “I am a responsible hunter and a gun-owner and I believe in the rights given by the Second Amendment, but firearms dealers are responsible for ensuring legal gun sales and ownership and for preventing the transfer of guns via straw purchase to fuel criminal violence, and they should be held accountable for careless behavior.”

Plaintiffs argue that Jeffrey Boyce’s name appears on the invoice for the firearms from the retailer and his credit card was used to pay for them but his mother was allowed to transfer the firearms into her name at the pawn shop they were shipped to.

The suit is backed by the Brady Center and is asking for $9 million in damages.

While Congress in 2005 passed relatively expansive protections for the gun industry against spurious litigation in the Protection of Lawful Commerce in Arms Act, the sometimes controversial measure only insulates against liability for injuries caused by a third party with their products — not in cases of actual negligence.

Litigants have seen a degree of success in the courts where gun shops sold firearms to straw buyers that later were used in tragic shootings by those barred from firearms ownership.

In 2015, a Milwaukee gun store was ordered to pay a $6 million settlement after plaintiffs argued shop employees on duty looked past a number of red flags in the sale of a Taurus PT140 .40-caliber handgun that wound up in the hands of a gunman who used the pistol a month later in the shooting of two police officers. A similar claim in which an Indianapolis police officer was wounded in 2011 following a fatal shootout with a convicted felon is moving forward in the courts.

Big box gun retailers Wal-Mart and Gander Mountain have likewise been brought into court over claims gun sales to straw buyers later used in high-profile murders should have been blocked at the point of sale over warning signs exhibited by the purchasers.

It should be noted that the Brady Campaign is involved in several of these suits. In cases where gun dealer or manufacturer negligence is absent or hard to prove, PLCAA has proved to be a shield.

Families of some of the Sandy Hook shooting victims in Newtown, Connecticut — where 26 students and faculty were killed — were able to get a $1.5 million settlement from the insurance company of the gunman’s mother, but a suit brought against gun maker Remington over marketing practices was dismissed by a state judge this month, citing PLCAA protections.

In another mass killing lawsuit — also a Brady case — survivors of the Aurora, Colorado, movie theater shooting lost a series of state and federal claims with judges holding up PLCAA protections.