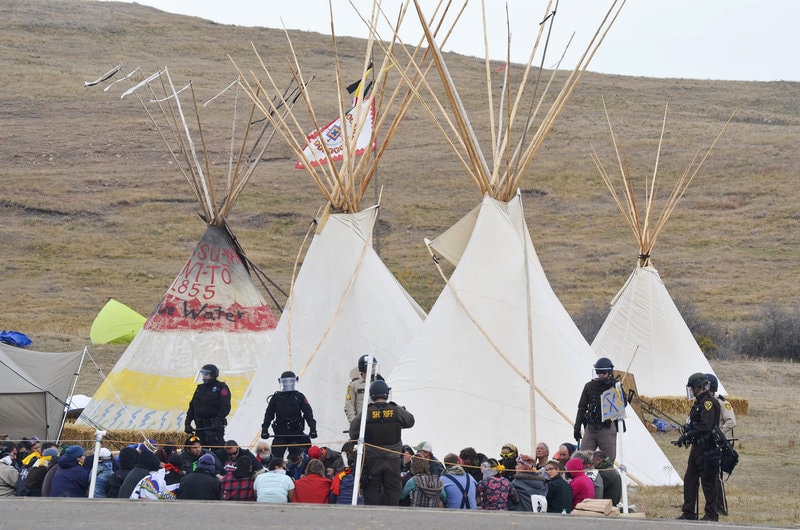 Law enforcement, decked out in riot gear, descended on a protest site occupying land owned by Energy Transfer Partners demanding that activists leave. After protestors refused to vacate the private property, the situation turned ugly as at least two protestors fired guns and several others hurled molotov cocktails at police.

One woman turned her .38 caliber pistol on officers, firing three shots and narrowly missing a sheriff’s deputy. In a separate incident, a protestor fired his gun and struck a man near “blackwater bridge” north of the main camp. The man suffered a gunshot wound to the hand, but was not seriously injured and was treated for his wound. Shooters in both altercations were taken into custody with no return fire from police. Officers instead turned to bean bags and pepper spray to subdue activists.

In all, 141 people were arrested during the nearly six-hour operation. According to a spokeswoman for the Morton County Sheriff’s Department, only minor injuries were sustained during the altercation.

Thousands have gathered since August to rally against the government’s use of the land tribes say is significant to Native American history.

“My nation’s history is at risk because the pipeline builders and the Army Corps failed to consult the tribe when planning the pipeline, and routed it through areas of cultural and historical significance, which will be destroyed,” said David Archambault II, chairman of the Standing Rock Sioux tribe, in a court filing against the U.S. Army Corps of Engineers.

In addition to disturbing sacred Native American ground, environmental activists have raised issue that the pipeline will run through the only source of water for residents in the area.

Operations on private developer land has continued, though the State Department halted construction on land near Lake Oahe pending further review. In a letter dated Oct. 25, Republican governors in Iowa and the Dakotas urged the Army Corps of Engineers  to resume operations at all sites immediately, despite pushback.

“The U.S. Army Corps of Engineers has spent well over a year reviewing the permit and it is now time for the Corps of Engineers to proceed with the last step of the process so that our states can begin to realize the benefits and opportunities provided by this important and vital piece of energy infrastructure,” the letter reads. “It is our understanding that this project meets all of the established federal requirements necessary to move the project forward.”

As videos, pictures and posts of Thursday’s fight spread across the internet, social media activists took to their keyboards to juxtapose the treatment of pipeline protestors against that of the Oregon wildlife refuge stand-off, who happened to be acquitted the same day tensions in the Dakota Access protests boiled over.

“So let me get this correct,” Alicia Garza, founder of the Black Lives Matter social movement, posted on Facebook. “If you’re white, you can occupy federal property … and get found not guilty. No teargas, no tanks, no rubber bullets … If you’re indigenous and fighting to protect our earth, and the water we depend on to survive, you get tear gassed, media blackouts, tanks and all that.”

Robert Reich, former secretary of labor under President Clinton, also took to the social media outlet to lash out against the treatment of tribes.

“On the same day that a jury acquitted the Bundy brothers and their fellow protesters for taking over federal land in Oregon last January, police in North Dakota today used pepper spray gas and a painful high-pitched siren, and then arrested 117 Native Americans and others for protesting a private oil pipeline across land they say belongs to the Standing Rock Sioux Tribe under a 19th-century treaty,” Reich wrote on Facebook. “In other words, it’s fine to mount an armed insurrection so your cattle can graze for free on federal land, but not if you want to protect your sacred burial ground or your only source of water from a private for-profit oil pipeline company.”

By the end of Thursday the hashtag #noDAPL was trending on Twitter.

If completed, the pipeline would span 1,172 miles to carry 470,000 barrels of crude oil from Bakken oil fields in North Dakota to Illinois.