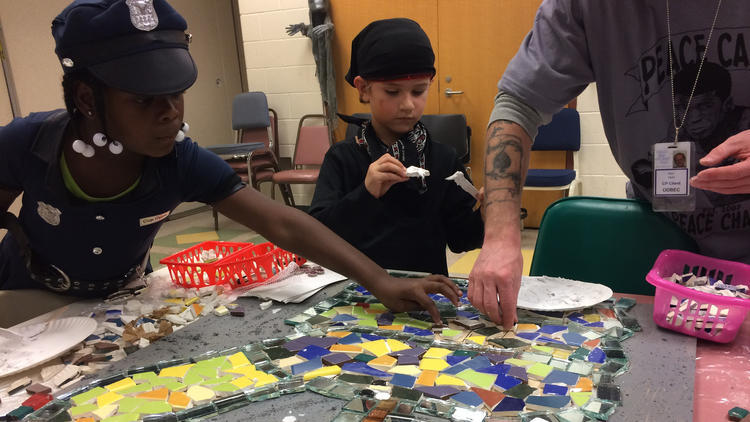 Fake weapons surrendered were replaced with basketballs, stuffed animals, art supplies and other goodies provided by the community. Water guns, replica guns and BB guns were then painted and used in the background of a mobile mosaic made by the nonprofit organization Mosaic Makers.

The completed art project will be displayed in honor of Tamir Rice, a 12-year-old Cleveland boy fatally shot by police while playing with a toy gun two years ago.

Event coordinator Ralph E. Moore, Jr. emphasized that plastic weapons as a child serve as a gateway to real guns as an adult.

“The replica guns are what’s dangerous,” Moore told The Baltimore Sun. He added that toy guns today remind of toy cigarettes that were a popular item when he was a child. ”It was orienting kids to smoking. I think toy guns, in many ways, are doing the same thing.”

“We can’t be everywhere during every instance, but small efforts like that are what promote great change,” Baltimore Police Detective Donny Moses told the local ABC station.

The toy gun surrender was part of a joint Halloween and 10-year anniversary celebration of a peace camp run by Moore and co-founder Nawal Rajeh. The camp runs three-to-four weeks during the summer in Baltimore and aims to teach its roughly 50 attendants how to de-escalate altercations and peacefully resolve conflicts. Participants range in age from 5 to 12 years old.

Moore said the idea sprang from Rajeh who persuaded Moore to start the camp after watching a fight between two young girls.

“That really struck me that solving our problems with violence is not just a national issue or a personal issue,” Rajeh told The Baltimore Sun. “It really permeates civil life.”

Peace Camp kids learn about nonviolent figures such as Dr. Martin Luther King, Mother Teresa and Nelson Mandela. They partake in calming activities such as dancing, cooking and creating artwork together. The camp is free and operates in two locations in the city.

“We’re trying to make a statement in opposition of the violence, to the gun violence in particular,” said Moore.

Baltimore has seen its fair share of gun violence. Last year the city witnessed nearly 1,000 people shot and more than 300 killed by firearms. So far this year, the gun-related body count is over 220.