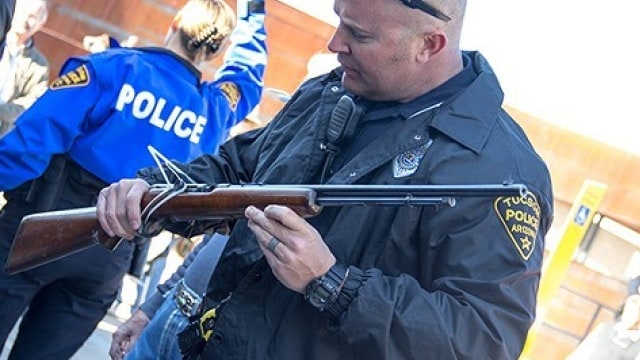 Officer Eric Coutts is checking the serial number on a rifle at the gun buyback event at the Midtown Tucson Police Department Substation on Tuesday, Jan. 8, 201,2 in Tucson, Ariz. (Photo: Noelle Haro-Gomez/Tucson Weekly)

State Rep. Mark Finchem, R-Oro Valley, filed a complaint with Brnovich Oct. 12 arguing the city of Tucson is destroying confiscated and forfeited firearms which, according to state law, are public property and should be sold as surplus.

“The city of Tucson flagrantly violated state statutes and deprived the taxpayers of the opportunity to obtain fair-market value of a public asset,” said Finchem, as reported by Tucson.com.

Going back as far as 2010, state lawmakers passed laws requiring cities and counties in Arizona to sell seized guns to licensed dealers rather than destroy them. Gov. Jan Brewer in 2013 expanded that mandate to include guns turned in because of buybacks. This year, Gov. Doug Ducey signed strong preemption laws that could see Tucson lose state funds and even see local officials fined for noncompliance.

The city responded to Brnovich’s office on Oct. 27 with a 16-page letter arguing the city has the authority under its charter to decide how they dispose of public property held by the Tucson Police Department, holding the agency takes in an average of 1,500 guns per year with about 85 percent of that figure being firearms forfeited in the course of criminal investigations.

While the city does auction some guns — limited to manually operated shotguns and rifles — as a policy it destroys any semi-auto or handgun not still needed for evidence or transferred to TPD for police use.

City leaders hold that any effort to halt Tucscon’s state funds over the gun issue would be improper.

“It is clearly unconstitutional. You can’t strip the city’s funding without due process,” said Democratic City Councilman Steve Kozachik.