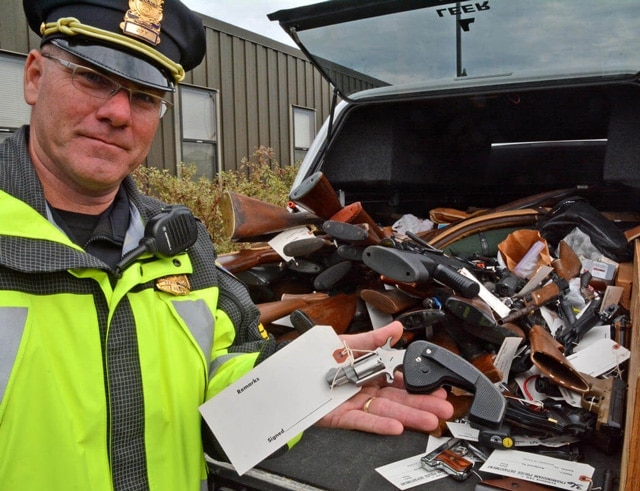 More than 150 guns and some more unusual items were collected during the Framingham Police Department’s first annual gun buyback.

The department said the event yielded more weapons than they expected. Among the guns collected was a collapsible North American Arms .22-caliber collapsible gun, something Sgt. Sean Riley said he hasn’t come across in his more than 20 years in law enforcement.

“Obviously when it’s out we can see there’s a barrel in there,” Riley explained. “You put that in your pocket most people would look and say, ‘Oh, that’s a knife in his pocket.’”

Riley noted it’s a weapon that can very easily be concealed.

Authorities, who say the buyback is aimed at keeping unwanted weapons off of the streets and out of the hand of criminals, also collected an inert grenade and a muzzle-loaded shotgun, along with a slew of handguns, revolvers, long guns, and even air rifles and toy guns. But Riley said most of the guns they collected weren’t all that unusual.

“These are the guns where, say mom and dad passed away … husbands, grandparents passed away — they’re cleaning out the house and they come across all of these weapons so they don’t know how to get rid of them; it’s kind of like hazardous waste.”