Philippine mayor gunned down by police in anti-drug operation 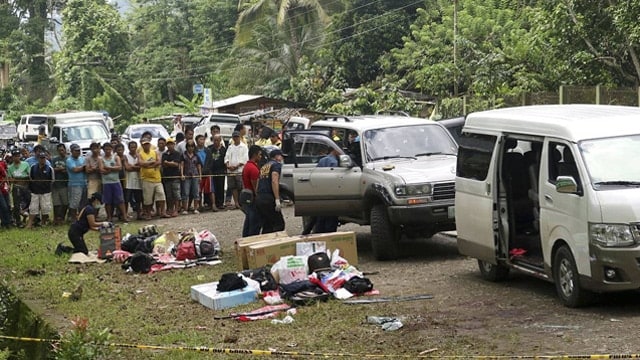 Authorities search vehicles that were part of the convoy transporting narcotics. (Photo: AP)

Samsudin Dimaukom, mayor of the small Philippine town of Datu Saudi, was gunned down by the police while allegedly with a convoy transporting narcotics.

The group was stopped just before dawn and Dimaukom’s guards opened fire on the officers, who returned fire, killing the entire convoy, including the mayor.

Rodrigo Duterte, who became president in June and promised to eradicate the country’s drug epidemic, publicly named numerous law enforcement and elected officials for their involvement in the drug trade, including Dimaukom, several months ago. Dimaukom, however, denied the accusations, but many others named by Duterte quickly turned themselves in.

Some 3,000 people believed to be involved in the drug trade have been killed since Duterte took office, but some – including the U.S. government – have criticized Duterte’s methods for dealing with the country’s drug problem and corrupt officials.

Nonetheless, where Dimaukom is concerned, police Superintendent Romeo Galgo Jr. called the incident a “legitimate anti-drug operation,” noting that the officers acted in self-defense, firing only after the suspects first opened fire on them.