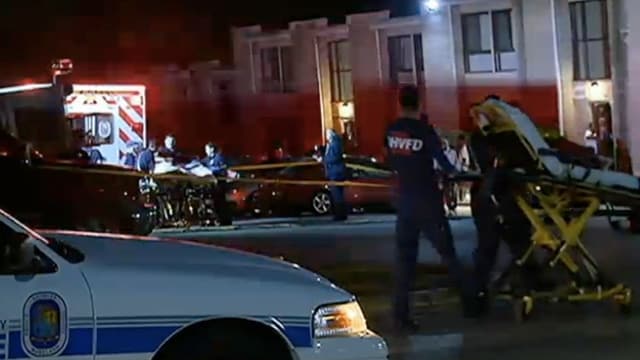 The scene of a shooting in suburban Washington, D.C. that left two teenagers dead and four other people injured. (Photo: WRC-TV)

Todd Webb Jr., 14, and Brian Davis, 18, were shot and killed after a party on Walker Mill Road in Capitol Heights, Maryland just before 3 a.m. Sunday. Four other people were injured, and two remain hospitalized – one of them with life threatening injuries. No one has been arrested, and police are interviewing witnesses.

WRC-TV in Washington is reporting that several cars were towed from an apartment building parking lot, the alleged scene of the shooting. One car had a rear window shot out. The front door to the apartment building was also damaged by gunfire.

“Detectives do not believe this was a random incident,” police said, according to Reuters.

Police are offering up to $25,000 for information leading to an arrest.

Capitol Heights is a suburb of Washington, D.C.