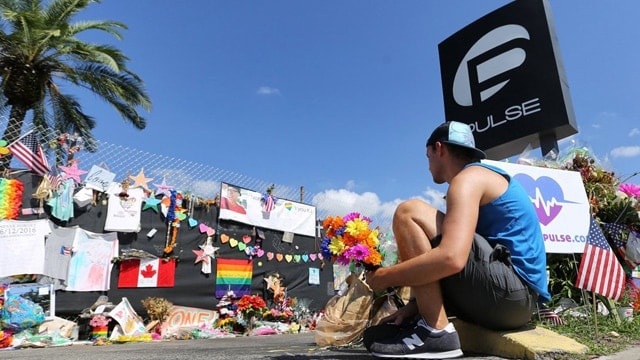 A judge ordered the calls be released immediately on Monday after months of pressure from more than two dozen media outlets. (Photo: Joe Burbank/Zuma Press)

“I wanna let you know — I’m in Orlando, and I did the shooting,” says Pulse nightclub shooter Omar Mateen in newly released audio of 911 calls from the June 12 massacre in Orlando.

Nearly 30 minutes of audio from Mateen’s calls were released Monday after a judge in Orlando ordered the city to make them public. Police spoke with Mateen in a series of phone calls that took place between 2:35 a.m. and 3:25 a.m. on the morning of the shooting. Transcripts of the calls were released in September, but it’s the first time recordings have been heard by the public.

The calls started when Mateen contacted police to tell them he was responsible. The first call started with him reciting a prayer in Arabic before saying he “did the shooting.” A dispatcher asked his name, to which he replied, “My name is — I pledge allegiance to (Abu Bakr al-Baghdadi) of the Islamic State.”

Mateen hung up on the dispatcher, but a negotiator called him back.

“Can you tell me where you are right now, so I can get you some help?” asked the negotiator.

“No, because you have to tell America to stop bombing Syria and Iraq,” said Mateen. “They’re killing a lot of innocent people, so what am I to do here when my people are getting killed over there? You get what I’m saying?”

“No. You already know what I did,” said Mateen.

“By the way, there’s…there’s some vehicle outside that has some bombs, just to let you know,” says Mateen in the same call. “Your people are gonna get it, and I’m gonna ignite it if they try to do anything stupid.”

“Okay, I understand that and I’ll pass that along,” says the negotiator, who identifies himself as Andy. “Can you tell me what vehicle, because I don’t want to see anybody get hurt.”

“No. But I’ll tell you this — it can take out a whole city block almost,” says Mateen.

At the end of the call, Mateen named other men who have committed terrorist acts, calling them his “homeboys.” “So now, it’s my turn,” he said.

The shooter hung up on the negotiator, who called him back more than a dozen times. “You’re annoying me with these phone calls, and I don’t really appreciate it,” Mateen said in one of the last calls with police. The negotiator told Mateen to put down his guns and go outside to talk with police. Mateen hung up and stopped picking up his phone.

Just after 5 a.m., a policeman drove an armored vehicle into the wall of the nightclub. At least eleven officers exchanged gunfire with Mateen, shooting as many as 150 bullets. Mateen was reported down at 5:17 a.m.

In all, 49 people were killed, and 68 were injured on June 12. Attorneys from two dozen media companies spent months pushing for the release of the 911 tapes. Orange Circuit Judge Margaret Schreiber ordered the city of Orlando to release them immediately Monday.