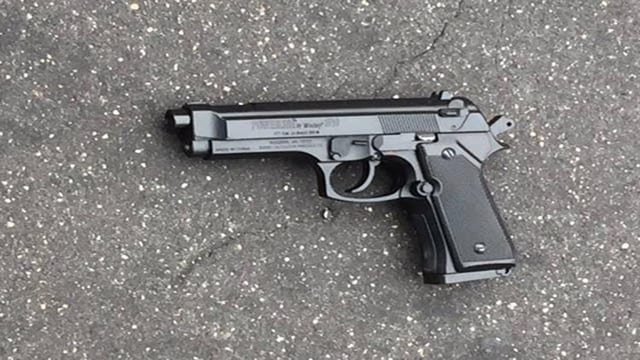 The replica gun police say Dedric Colvin was carrying at the time he was shot. (Photo: New York Daily News)

Three members of the City Council Judiciary and Legislative Investigations Committee voted Monday in favor of the bill, which would ban the possession of any “toy or imitation weapon that can reasonably be perceived to be a real firearm.”

Similar incidents have unfolded across the country over the last three years, spawning bans in cities like Boston, New York and Chicago. Last month police officers in Columbus, Ohio, shot and killed 13-year-old Tyree King after the teen pulled a BB gun from his waistband during questioning over a reported armed robbery in the area.

The city council bill punishes possession of replicas — including BB guns, air rifles and pellet guns — with a $250 fine for first offenses and a $1,000 fine for all subsequent offenses. Repeat offenders who are caught more than twice with the replicas face a misdemeanor charge and a maximum 30-day jail sentence.

The committee approved an amendment to the legislation Monday excluding guns clearly marked as toys or used for training purposes or paintball.

“If we had our way, we would ban all handguns in the city of Baltimore,” Kraft told WBALTV 11 News. “We just don’t have the authority to do it.”

The Baltimore Police Department sent city council a letter backing the legislation on Oct. 24, suggesting members amend the bill to punish businesses who sell the replicas, too.

“The Department submits that if possession of replica guns is banned in Baltimore, it logically follows that they cannot be sold either,” said Andrew Vetter, the department’s chief of staff.

The bill is scheduled for a final vote Dec. 5, WBALTV 11 News reports.