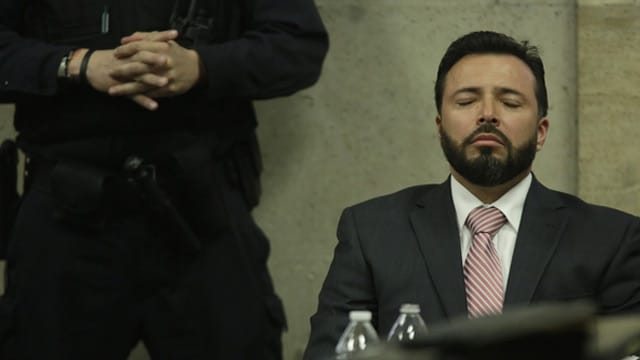 A former Chicago police detective who was acquitted of a fatal shooting on a legal technicality wants disability pay from the city, saying he suffers from post traumatic stress disorder brought on by the 2012 incident.

Dante Servin, 48, resigned from his $104,000 a year police detective position earlier this year, days before a hearing that would decide whether he should be fired for a controversial shooting in which he killed an innocent bystander while off-duty. The Chicago Tribune reports that Servin could get as much as 75% of that salary until he’s eligible to collect his police pension.

Servin fired shots from his car as he drove by a group of people on the West Side in 2012. He claims someone pointed a gun at him as he asked a group of people to quiet down. That’s when he opened fire. One of the shots hit 22-year-old Rekia Boyd in the back of the head, killing her. No gun was recovered at the scene. Servin was charged with involuntary manslaughter, but was later acquitted.

Servin kept his job for four years after the 2012 shooting, drawing the ire of several protestors in Chicago.

According to Servin’s attorney, Thomas Pleines, previous court decisions on the matter hold that police can collect disability pay after they resign as long as they apply for it before their resignation. Servin applied for disability a month before calling it quits.

The police pension board will decide whether Servin can get the disability pay. He will have to prove that he suffers from PTSD, and that the 2012 shooting was what caused the disorder.

Servin has seen doctors, and they’ve found that he can’t return to work “as a result of the various manifestations of the PTSD,” Pleines told the Tribune. If the police board decides to hear the case, a board approved doctor will examine Servin.

“Let’s be real. Some of the police officers actually do (face) danger,” Martinez told the Tribune. “This is just a case where (he) wasn’t even close to being in danger. No weapon found. And look at the justice we got.”