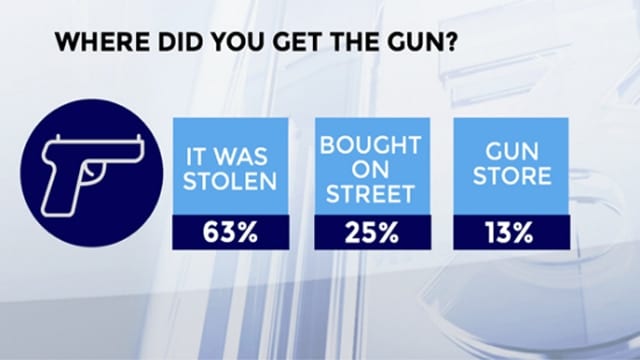 Abc13 News surveyed offenders who used guns to kill others and asked for advice on how to reduce Houston’s climbing murder rate, up 11 percent over the last year.

“I feel like guns is not the problem,” said Cedric Jones, a 44-year-old felon who responded to the station’s survey. “People just need to respect each other and stop being disrespectful. Youngsters in the hood need to listen when older people tell them something. Guns will always be in the streets of H-town. Sorry to say that.”

Jones said he paid $250 on the street for a stolen 9mm handgun to protect his family. He wasn’t legally allowed to buy a firearm himself, just like 90 percent of the inmates surveyed, and his weapon of choice turned out to be the most popular — three quarters of the gun murders in Houston are committed using 9mm handguns.

None of the inmates used rifles to commit their crimes and none bought firearms at a gun show, the station reports.

In 2012, Jones shot two brothers during an argument, killing one and wounding the other, according to Houston police reports.

Jones told the news station he sold drugs to make money and a decent job opportunity might have been the only thing to prevent the murder he eventually committed.

Jesus Vasquez, 22, said shutting down gun sales on the black market “is only part of the solution to making Houston safe.”

“The true solution is changing the hearts of men from within,” he wrote in the survey. “Out of the heart of men proceed evil thoughts … murders, thefts, covetousness, wickedness, deceit … All of these evil things come from within.”

Vasquez bought his 9mm handgun for $270 from a friend he thinks probably stole the weapon from someone else. He owned it less than 24 hours before he used it to shoot and kill another person.

Another inmate, 19-year-old Anthony Jamerson, cautioned gun owners to secure their weapons as a way to thwart thieves. “Most come from break-ins, out of stolen cars,” he wrote in the survey. “So gun owners need to secure and lock guns away from thieves and young teens.”

Jamerson used a 40mm handgun he got from a friend to shoot and kill a man in a hotel parking lot in May 2014, according to local media reports. Three weeks later, police said Jamerson shot and killed a gas station clerk during an attempted robbery. He wrote in his survey he wanted to interview with the news station to “help and reach out” to other Houston-area teens “going down the same road.”

Rodney Rachal, 46, wasn’t as optimistic about ways to reduce gun violence, writing “nothing, no matter the efforts of law enforcement along with laws, guns will always be available on the black market.”

Rachal is serving a life sentence after he used a .357-caliber handgun to shoot and kill another man during a robbery in October 1990. He bought the stolen weapon for $80 and carried it around “every day 24/7” before committing the murder.

He told the news station he was more concerned about getting caught with crack cocaine than an illegal gun — a sentiment reinforced by the county’s lax application of punishment for illegally obtaining a firearm. A database released by the Harris County District Attorney’s Office shows over the last six years, convicted felons caught with guns served just three and a half months behind bars — far less time than the two to 10 years outlined in state law.