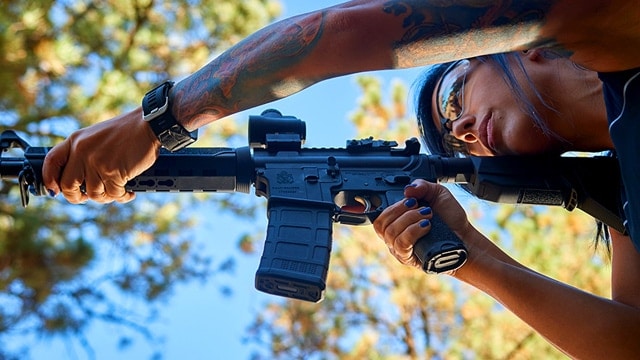 After weeks of sharing teasers on social media, Illinois gun maker Springfield Armory introduced the Saint, the company’s iteration of the AR-15 platform.

Springfield has long been making rifles, but primarily updated versions of the M14, an iconic World War II military rifle. The company describes the new Saint more as a mindset rather than another ubiquitous rifle.

“The moment you realize you have something to lose, you have a choice. Train to defend it. Or let someone else define its fate,” reads the company’s website. “Which will you choose?”

In commercials the rifles are accented by beautiful shooters, who clearly love working out, with sweat glistening on their bodies, covered by tight Under Armour clothing, and ominous electronic music. Standing in deserts and mountaintops, they aim by leveling the fore-end with a fully extended arm — like a pro — before opening fire at an unknown enemy.

The company calls the Saint “the ultimate refinement of the AR-15 form” as it combines the “Accu-Tite receiver mating system with the relentless execution of core features.”

Features include an optics-ready flat top design, flip up rear sights and a fixed A2-style front sights, a 16-inch chrome moly vanadium barrel with a 1-in-8-inch twist, and Bravo Company components such as a rattle-free buttstock, PKMT KeyMod handguards and pistol grip.