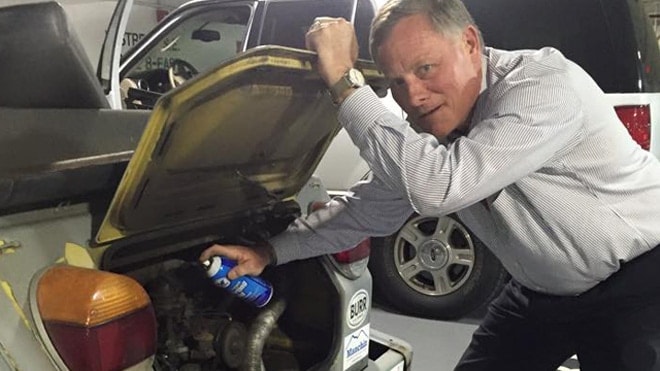 Sen. Richard Burr, a Republican from North Carolina, caught spraying some kind of chemical from an aerosol can to an engine. (Photo: Burr/Facebook)

A Republican senator has apologized for a joke he made about putting a “bullseye” on presidential candidate Hillary Clinton.

U.S. Sen. Richard Burr joked during a private political event in Mooresville, North Carolina, where he stumped for himself and the Republican presidential candidate Donald Trump, according to audio leaked to the press.

“Nothing made me feel any better than I walked into a gun shop I think yesterday in Oxford there was a copy of Rifleman on the counter. It’s got a picture of Hillary Clinton on the front of it. I was a little bit shocked at that — it didn’t have a bullseye on it,” he said, riffing off the NRA logo on an audience member’s hat.

“But on the bottom right it had everybody from federal office in this particular state that they should vote for, so let me assure you there’s an army of support out there right now for our candidates,” he added.

When confronted with the statement he told the reporters that he was feeling “better’ about other GOP candidates winning support from gun rights groups, not from Clinton potentially being shot. “The comment I made was inappropriate, and I apologize for it,” Burr said in a statement issued to CNN on Monday.

Still, gun control groups pounced on the North Carolina senator and connected his words with those of Trump’s after winning the Republican nomination.

“Senator Burr’s inciting and violent language – much like what Donald Trump has said before – is unacceptable and simply not how we talk to people in the Carolinas. These kinds of threats are completely out of step with our state’s values and long history of responsible gun ownership,” said Christy Clark, a spokeswoman for the North Carolina’s chapter of Moms Demand Action.

In a statement, the Brady Campaign said an apology is not enough and went a step further by demanding Burr resign from his seat in office.

“That a sitting U.S. Senator, much less the chair of the Senate Intelligence Committee, would effectively endorse the assassination of a presidential candidate should make every American sick to their stomach,” said Dan Gross, Brady’s president. “Every U.S. citizen and proponent of democracy should be concerned so long as Richard Burr remains in office.”

In August, Trump told a crowd that if Clinton appoints a new Supreme Court Justice “nothing you could do, folks — although the Second Amendment people, maybe there is. I don’t know.” He later backtracked, saying he didn’t mean gun owners would assassinate her if she appointed a new Justice but rather they could vote in the upcoming election.

Burr has received campaign contributions from gun groups for his race for North Carolina senator. The latest polls put Burr’s opponent, Democrat Deborah Ross, within the margin of error.