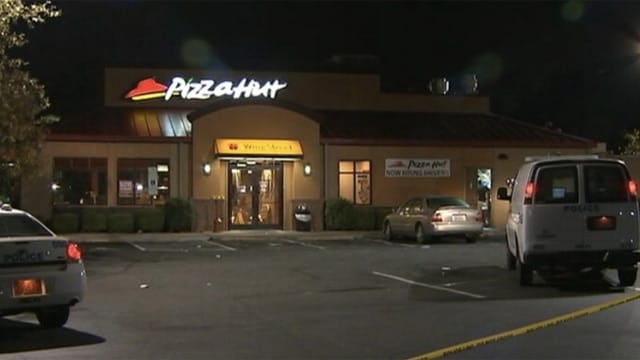 Pizza Hut has a no guns policy and it’s unclear at this point whether the armed employee will face disciplinary action. (Photo: WSOC-TV)

An attempted robbery at a Pizza Hut in Charlotte, North Carolina, early Sunday morning was thwarted by an employee who was carrying a gun of his own.

According to reports from local media, three suspects, at least one armed with a gun, broke into the restaurant around 1:40 a.m. The business was closed at the time and no customers were present, but employees were still there working.

Upon seeing the robbers, the armed employee, fearing for the safety of himself and others, opened fire, striking one of the suspects and sending the other two fleeing. Employees immediately called the police.

Paramedics responding to the call pronounced the suspect dead at the scene. He was later identified as 28-year-old Michael Grace, and officers recovered the handgun carried by him during the attempted robbery. There were no reports of anyone else being injured.

Authorities are still working to identify the other two suspects, who, as of late Monday, remain at large.

In response to the incident, Pizza Hut released the following statement:

The local Pizza Hut franchise is fully cooperating with the Charlotte Police Department as they continue their investigation, but want to stress that the security of its staff is of utmost concern. They are providing support to the team members involved to ensure their health and well-being following this incident. The employee involved in the shooting has been placed on a leave of absence following further review.

According to their employee handbook, Pizza Hut expressly prohibits the possession of any and all weapons, including guns. No exceptions are made for individuals with concealed carry permits or licenses.

The employee, whose name has not been released, is not facing any charges at this time, and Tony Scheer, a defense attorney and former prosecutor, told reporters it’s not likely that he will.

“It’s going to be a rare case that they want to do anything to the person that defended themselves to shoot somebody,” Scheer said.