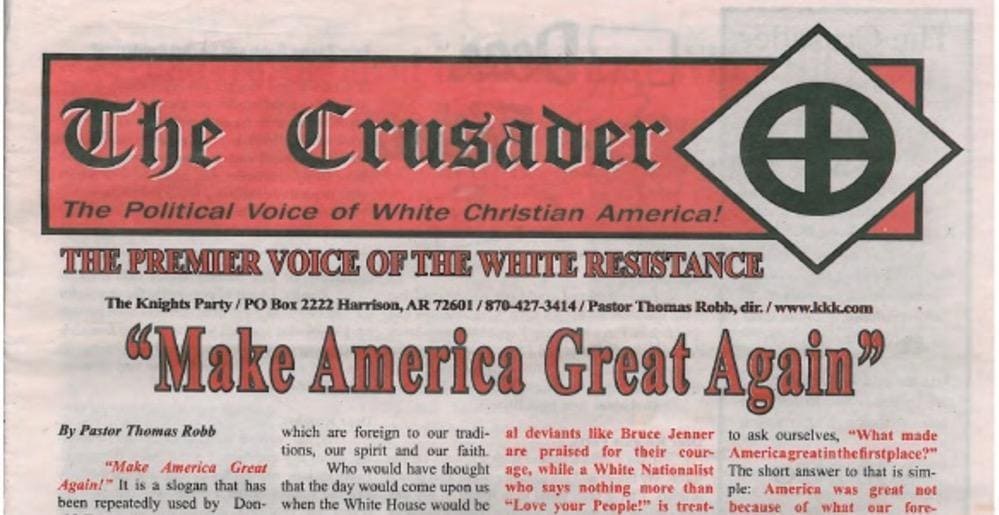 “The Crusader” is the official newspaper of the Ku Klux Klan, which officially endorsed Donald Trump for president.

Perhaps learning from past mistakes made during this election season, Donald Trump quickly denounced an endorsement by the Ku Klux Klan.

“While Trump wants to make America great again, we have to ask ourselves, ‘What made America great in the first place?'” the article reads. “The short answer to that is simple. America was great not because of what our forefathers did — but because of who our forefathers were. America was founded as a White Christian Republic. And as a White Christian Republic it became great.”

In a statement issued to media, the Trump campaign said: “Mr. Trump and the campaign denounces hate in any form. This publication is repulsive and their views do not represent the tens of millions of Americans who are uniting behind our campaign.”

In February, Trump dodged questions and failed for several days to denounce support from David Duke, a former Grand Wizard of the KKK and politician who promotes white nationalist ideas.

Also, Trump — who launched his campaign by referring to Mexican immigrants as drug dealers, rapists and criminals — has been credited with empowering hate and other fringe groups who have been so brazen to take their message mainstream.

Shortly after Trump won the Republican nomination in July, his opponent, Hillary Clinton, slammed him using for his repeated use of insensitive comments and disparaging remarks about minorities in stump speeches and on social media.