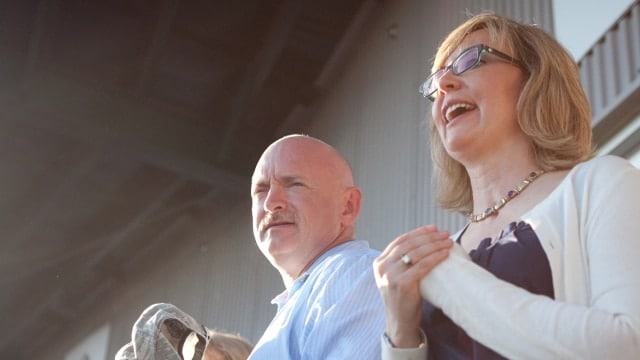 Former U.S. Rep. Gabby Giffords along with her husband Mark Kelly have crisscrossed Minnesota in the past year, stumping for candidates who are in favor of more gun control (Photo: Americans For Responsible Solutions)

Besides dropping cash in federal elections, gun control advocates are funding campaigns against incumbent Republicans in the Minnesota state legislature.

Democrats of the DFL Party need to hold their own and pick up seven seats to win control of the Minnesota House. Republicans are already in the minority in the state Senate. In both, big money campaigns run by gun control PACs and organs are targeting a number of GOP incumbents in suburban districts.

“This issue matters to voters in Minnesota — in fact, 82 percent of Minnesota voters support background checks for all gun sales, and we want our elected officials to take action to keep guns out of dangerous hands,” said Marit Brock, leader of the Minnesota chapter of Moms Demand Action, in a statement. “Thousands of volunteers are knocking on doors and making phone calls throughout Minnesota, talking to voters and urging them to vote for candidates who support common-sense gun violence prevention policies that put Minnesota families first.”

Moms Demand Action along with parent organization, former New York Mayor Michael Bloomberg’s Everytown group, are spending in excess of $400,000 as detailed by the Minneapolis Star-Tribune, to win control of the House and unseat pro-gun Republicans.

Senate Minority Leader David Hann, R-Eden Prairie, is the target of one Everytown ad that says he is “putting the gun lobby ahead of women” when it comes to expanding background checks to all gun transfers. Similar ads are being run against Republican Reps. Sarah Anderson and Mary Shapiro.

Americans for Responsible Solutions, the gun control group founded by former U.S. Rep. Gabby Giffords, has set up a franchise in Minnesota and, as part of a bus tour through the region, endorsed a series of 31 candidates for the state legislature. The group, which has spent millions on federal elections already this cycle, is backing that up with a “six-figure” ad buy in the state announced this week.

In the past, gun control has been a hard sell in the state. The fastest growing sport among high schoolers in Minnesota is clay shooting, concealed carry permits in the state have more than doubled and GOP-backed gun reforms passed with veto-proof margins to be grudgingly signed by the state’s Democrat governor.

DFL members in the state legislature have in recent months debuted bills for universal background checks and to establish gun violence restraining orders despite not having the political muscle to push them through committee.