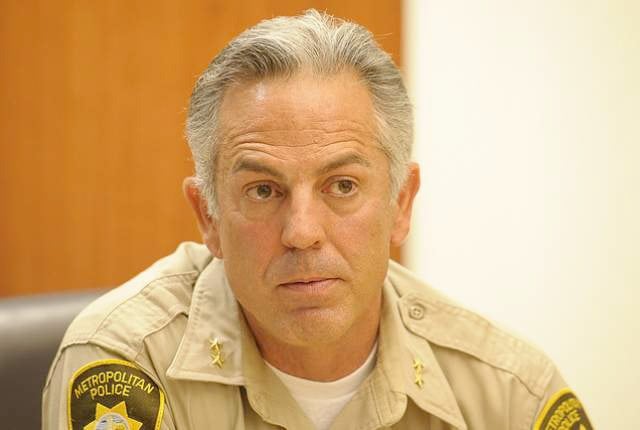 He stood alone against many of the state’s top officials — including Republican Gov. Brian Sandoval, Lt. Gov. Mark Hutchinson, Nevada’s 16 other elected sheriffs and even his own undersheriff, Kevin McMahill.

Question 1 would require background checks for most private sales and transfers in the state of Nevada, though critics of the ballot measure argue it’s vaguely written and would criminalize the most trivial actions among law-abiding gun owners.

“This measure goes so much further because it requires a background check nearly any time a gun leaves the physical possession of its current possessor,” Hutchinson wrote in an Oct. 27 editorial for the Deseret News. “For instance, Nevadans who want to loan their gun to a cousin or trusted, lifelong friend would be required to perform a background check on the cousin or friend before they could lend the gun, even if only for a few hours.”

“To underscore the point, the law is so poorly written that when the gun is being returned to its legal owner, the person who borrowed it must run a second, subsequent background check to legally return that gun,” Hutchinson continued. “That doesn’t make very much sense.”

Still, Lombardo, who also heads the Las Vegas Metropolitan Police Department, maintains “it’s up to the people” to decide Question 1. Sources on the ground in Nevada insist, however, that’s not what Lombardo says behind closed doors.

C.G. Gates, editor of the Nevada Carry blog, reports near-weekly on Question 1 campaign updates — from what he alleges is voter intimidation from anti-gun groups at Nevada’s early voting stations to “Vote No on One” bumper stickers finding their way into trick-or-treaters’ bags of candy. Gates said Lombardo’s pro-Question 1 rhetoric nearly swayed personal friends of his into voting for the ballot measure.

“We just found out that our Clark County Sheriff, Joe Lombardo, who has officially taken a neutral position, is still speaking in favor of it in private circles,” Gates wrote in an Oct. 28 blog post. “We found this out from a couple of people who had attended an event recently where he was a speaker. They took what he said as gospel, even though they were pro-gun people.”

When asked, Gates couldn’t provide more information on the event itself or the people who say Lombardo spoke favorably of the measure.

In a poll commissioned by the Las Vegas Review-Journal last week, 54 percent of 800 likely voters support Question 1 and 38 percent oppose. The results show support for the measure dipped 4 percent while opposition increased 6 points since the first time the paper commissioned the survey in September.

Nevadans for Freedom, the NRA-backed Question 1 opposition campaign, told the Review-Journal last week the poll numbers indicate a growing level of awareness among voters of the implications of passing such a law.

Nevadans for Background Checks — the state-based political action committee leading the campaign in support of Question 1 — isn’t worried, either, saying enthusiasm for the measure at early voting locations proves “Nevadans see through the misinformation by the opposition and support common sense gun safety laws.”

So far, former New York Mayor Michael Bloomberg and his gun control advocacy group, Everytown for Gun Safety, has dumped a combined $13 million into the ballot measure campaign in Nevada. Bloomberg and his supporters believe Question 1 will close the “gun show loophole” and keep firearms out of the hands of criminals, domestic abusers and the mentally ill, among other prohibited persons under federal law.