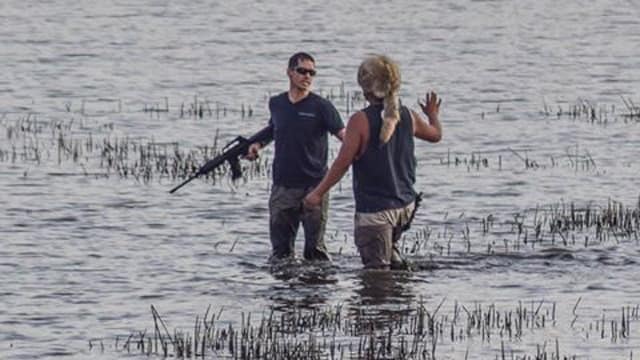 Kyle Thompson, pictured here with a rifle, went to the area to take photos of equipment, part of his job as a contracted security employee. (Photo: Steemit)

A worker with the Dakota Pipeline access who was detained last week after pulling a gun on a group of protesters will not face any charges, as he acted in self-defense, the Morton County Sheriff’s Department announced in a news release Tuesday.

Kyle Thompson, of Bismarck, North Dakota, was assigned with the task of taking photos of damaged equipment near the construction entrance on Thursday, where hundreds of protesters were gathered. According to Morton County Sheriff Kyle Kirchmeier, Thompson works for Leighton Security, a Texas-based security firm contracted to provide protection of the pipeline equipment.

Thompson, a U.S. Army veteran, knew the risk of going to the area and, according to his own account of the incident, opted to disguise himself, as not to be singled out by protesters as a pipeline worker.

But as Thompson attempted to leave the area, he was approached by protesters anyway and his truck deliberately hit by another vehicle. Thompson’s truck was run off the road and through a fence, where it became disabled. Thompson said at that point, he took his rifle from his truck as what he described as “over 300 protesters” rapidly approached him, several of whom were armed with knives and “dead set on using those knives,” he said.

Armed with an AR-15, Thompson tried to back away from the protesters, as they continued to come at him, while others set his truck on fire and one man fired a flare gun in his direction. Thompson said at that point, he made the decision to retreat into a nearby river as to not be surrounded, overtaken and his rifle used against him or others.

Despite previous reports suggesting otherwise, Thompson never fired a single shot from his rifle, and he willfully and without further incident turned his weapon over to Bureau of Indian Affairs as he was apprehended.

“I would put my own life on the line if I thought that anyone’s life was in danger, either side of this situation in which we’re faced with here in North Dakota,” Thompson said, adding that he would continue his mission – protecting those around him – until he is physically unable to do so.

On the same day of the incident involving Thompson, 141 people were arrested as authorities tried to push out protesters who have occupied the area in opposition of the oil pipeline’s construction, which they say is being built on grounds of both historical and sacred significance to Native Americans.