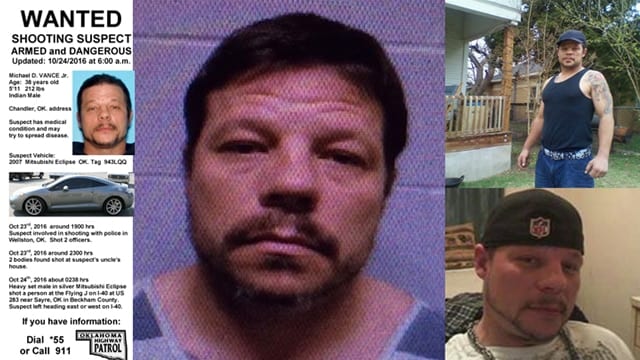 Michael Vance was shot and killed Sunday after a deadly rampage that sparked a nationwide manhunt. (Photo: KWTV)

A weeklong manhunt in Oklahoma ended Sunday, after police shot and killed a man suspected of killing two people, shooting two officers and at least two others in a string of carjackings.

A state trooper shot and killed 38-year-old Michael Vance near Leedey, Oklahoma after a half hour chase and an exchange of gunfire. U.S. Marshals Service spokesman Dave Turk says Vance shot and wounded an officer earlier Sunday, the third policeman to be shot by Vance during the weeklong manhunt. The officer suffered non-life threatening injuries, according to The Oklahoman.

Fox News reports that someone in Hammon, Oklahoma spotted the Mitsubishi Eclipse Vance was last seen in. It was covered by tumbleweeds and investigators say Vance was building a campsite in the area.

Three people are facing felony charges for aiding Vance during the manhunt. Danny Roach, Reginald Moore and April Harden were charged with helping Vance evade officers. Authorities say the three — all hailing from Oklahoma City — gave Vance bandages and weapons after he shot at officers and killed his family member.