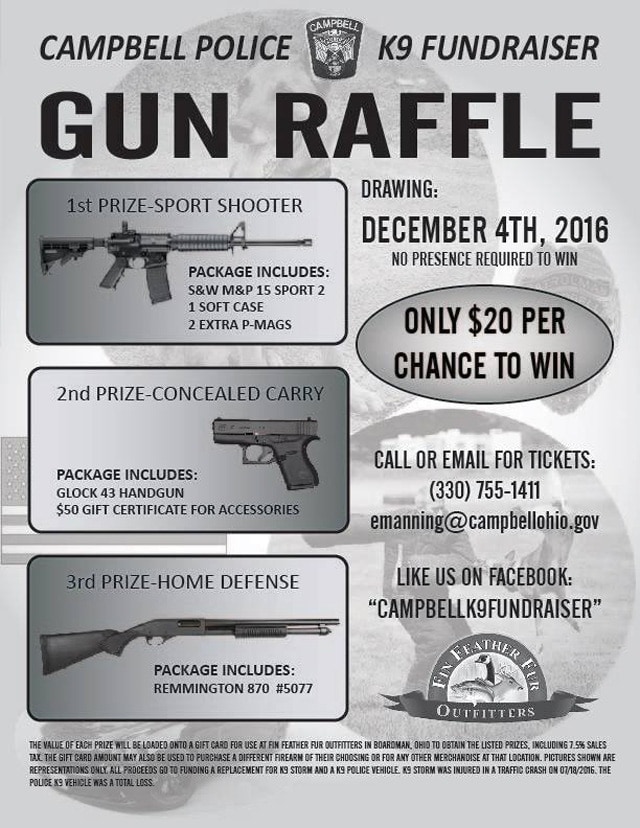 The Campbell Police Department in Ohio is in need of a new K-9, but some aren’t exactly happy that the department is sponsoring a gun raffle to raise the needed funds.

Storm, a K-9 who has worked with the department for more than six years, was involved in a car accident over the summer left him injured and permanently on light duty.

About $15,000 is needed to find a replacement for Storm, and that’s where the gun raffle comes in. Manning said the response to the raffle has been overwhelmingly positive, with some out-of-state residents even contacting the department to participate in the raffle, which, of course, they can’t. But some are appalled at the idea of the police department giving away guns – or in this case, gift certificates for gun purchases – even if they do follow all of the required gun laws in the process.

“One of the main complaints that I’m hearing is, ‘You’re a police department. Your job is to get guns off the street,’” Manning said, but that argument isn’t exactly accurate.

“At the Campbell Police Department, we believe in the Second Amendment,” Manning added. “We believe in people’s right to bear arms. We believe in law-abiding citizens’ right to own guns. We also believe in Ohio’s concealed carry laws.”

Despite some opposition, the raffle will go on. Tickets are $20 and can be purchased only by Ohio residents. The drawing will be Dec. 4 and the winner will receive a gift card for the gun of their choice.