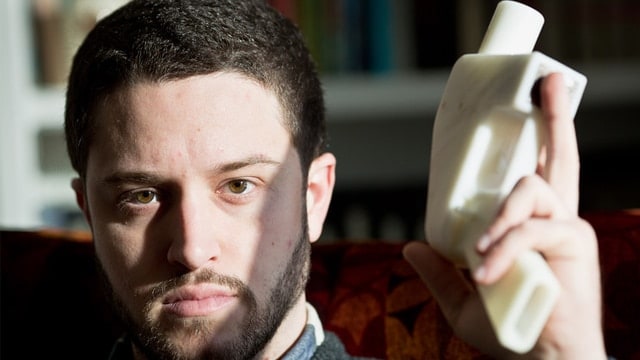 Cody Wilson, seen here with a printable gun, developed the world’s first such weapon, and he wants the common man to have access to the plans. (Photo: Steve Jones/The Wall Street Journal)

The First and Second Amendments collide as one man fights for America’s right to print out a handgun at home.

A few years ago, Cody Wilson began a crowdfunding campaign for $20,000. He wanted to buy a 3D printer and pay somebody to develop a blueprint for a working, printable plastic gun. Fighting to “keep power in the hands of the common man,” Wilson started marketing his campaign. Then he wrote a book about the firestorm that followed.

In September, a three-judge panel ruled 2-1 that Americans can’t download or use the instructions Wilson developed. He says the plans are protected under the First Amendment, and the ruling is a violation of free speech.

It isn’t Wilson’s first hurdle. When he was starting out, his crowdfunding campaign was cancelled by Indiegogo, so he had to ask for bitcoin donations. YouTube yanked his promo video — three separate times. The company that leased him the 3D printer found out what he was up to, and they took the printer back. And a website that publishes user generated design files for 3D printers pulled all gun related designs.

But Wilson pushed on. In May 2013, he developed the world’s first plans for a printable gun. He called it “The Liberator.” And he started his own website so he could publish the design, allowing the American common man to push a couple buttons, and print themselves a handgun. The plans were downloaded 100,000 times in the first two days. But the Department of Defense Trade Controls demanded he pull the plans from his site.

Gun control proponents haven’t taken kindly to Wilson’s crusade. One congressman called for a ban on “wiki weapons” by renewing the Undetectable Firearms Act, a law that made it illegal to make or sell guns that walk-through metal detectors can’t pick up. Sen. Charles Schumer, a Democrat from New York, called for a ban on printable guns in May 2013.

“A terrorist, someone who’s mentally ill, a spousal abuser, a felon can essentially open a gun factory in their garage,” he said.

In 2013, Wilson’s Defense Distributed developed a component for an AR-15 that anyone could download and print at home. In 2015, he went after the State Department’s censorship of his plans.

For now, Wilson’s efforts at 3D printable guns have been halted by the courts. But Wilson, a law school dropout, tweeted after the September decision that he’ll be asking for an en banc hearing by the full 5th Circuit.

“The files themselves are a powerful species of political speech,” Wilson said at a talk in 2013. “And how do we know they are political speech? Because the‘re being fought so strongly.”