Consumers delay large purchases, opt for guns instead ahead of election 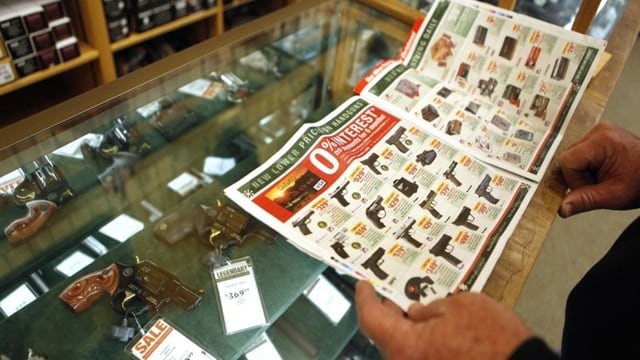 A customer looks through the in-store sales advertisements in Fort Worth, Texas on Nov. 27, 2009 (Photo: Jessica Rinaldi/ Reuters)

A private survey conducted by Harris Polls found 97 percent of consumers will forgo major purchases — like homes and cars — until after the Nov. 8 election, with some opting to buy guns instead.

Researchers polled more than 2,000 adults between Oct. 20 and Oct. 24, on behalf of the supply chain company Elementum, according to multiple media outlets, and found 16 percent planned to buy a gun ahead of Tuesday’s election.

Detailed results show one in five southerners plan to buy a gun ahead of the election. Almost a quarter of respondents aged 35 to 44 say they, too, plan to buy a firearm in the next week. Some 24 percent of women also indicated a gun was their top purchase priority.

Presidential elections have long influenced gun sales nationwide — a historical trend many firearms retailers big and small say they count on to drum up sales in the weeks before the election.

Both Beretta and Gander Mountain unveiled pre-election sales within the last week, offering deals on ammunition and semi-automatic weapons, The Washington Examiner reports.

Even privately-owned gun shops, like Westside Armory in Las Vegas, jumped on the bandwagon last month with its attention-grabbing “Crooked Hillary” sale.

Cameron Hopkins, owner of Westside Armory, said the hype around gun control under a potential Hillary Clinton presidency is great for business.

“We absolutely recognize that when Hillary Clinton is the next president, gun prices are going to go up,” he said during an Oct. 18 interview with Guns.com. “We want to make everyone aware that there will be much more gun control and there will be a panic wave, just like when Obama was elected in 2008 and 2012. It’s just simple economics.”

But it’s the potential for her to tilt the scales of the Supreme Court by nominating a liberal, anti-gun justice capable of overturning the landmark Second Amendment case D.C. v. Heller — a 5-4 decision from 2008 that cleared the path for states to loosen gun regulations across the country — that has the National Rifle Association dumping more than $25 million into Republican nominee Donald Trump’s campaign and congressional Republicans scrambling to protect the down ballot races often threatened by Trump’s incendiary remarks.

With more than 22 million checks under its belt so far this year, NICS could outpace the 2015 record by the end of November.