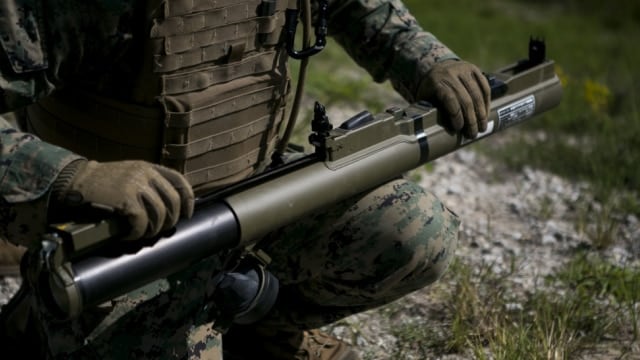 The M72 Light Anti-Tank Weapon is a portable one-shot 66-mm unguided anti-tank rocket that has been in service since 1963. (Photo: DoD)

The last of three Washington National Guard soldiers who swapped a live anti-tank rocket launcher among themselves after returning from a combat tour in Afghanistan was sentenced to probation this week.

A Tacoma federal judge sentenced Anthony Laitta on Monday to one year probation for his role in smuggling a M72A5 Light Anti-Tank Weapon out of a military base with Victor Naranjo and Kyle Nespory, both of whom were sentenced earlier this year. They all pleaded guilty to their charges, but received reduced sentences because of mental anguish brought about by war.

According to court documents, authorities learned about the weapon in September 2011 when Nespory’s girlfriend, Sabrina Hale, forked it over to the Pierce County Sheriff’s Department after finding it in a closet at her home. Deputies turned the rocket over to federal authorities, who disarmed it and identified it as made by a Norwegian company in 2007 for the Canadian military.

Turns out the 66mm rocket was a “battlefield exchange” between a Canadian unit and a regiment out of Fort Lewis, Washington, when they operated in Afghanistan’s volatile Helmand Province as part of Operation Moshtarak. All three soldiers had been assigned to the Washington unit.

Once back at Fort Lewis, Laitta took the trophy rocket out of storage, wrapped it in a garbage bag and smuggled it off base to the rental house he shared with other soldiers. Then, in January 2011, he brought the rocket over to Naranjo’s house for a party. The war trophy — with a warhead capable of penetrating a 8- to 12-inch steel plate, two feet of reinforced concrete, or 6-feet of soil — was shared among guests who posed with it for photographs.

After the party, Naranjo, who was a sergeant in charge of some of those attached to the weapon, kept the rocket at his house as he pondered how best to dispose of it. A month later, he gave it to Nespory. Eight months after that, Nespory moved out of Washington, but left the rocket behind in the closet of apartment he shared with Hale, who turned it over to police.

Ultimately, no one was hurt and the LAW was never fired. In 2014, authorities arrested and charged Naranjo, Nespory and Laitta, and they were all given plea agreements this year.

The ranking enlisted man, Naranjo, entered a guilty plea to one misdemeanor count of improper storage of explosives, and received a sentence of one-year probation in March. His attorneys argued he neither smuggled the device into the U.S. nor off base, and only became involved to help his brothers in arms. In a letter to the court, Naranjo’s attorneys asked for leniency because he suffers from trauma, suicidal feelings and alcoholism because of his multiple deployments to Iraq and Afghanistan.

Likewise, Nespory pleaded guilty to improper storage of explosives. He received six months probation in February. In a letter to the court, his attorneys said he has been diagnosed with Post Traumatic Stress Disorder and receives medication. According to court documents, he was shot three times by a sniper in 2010. He now attends college in Los Angeles.

As for Laitta, the soldier who left base with the LAW in a trash bag, he was hit with both improper storage of explosives and felony possession of stolen government property valued in excess of $1,000, to which he pleaded guilty to in January. A federal judge sentenced him to one year probation, and ordered him to have a mental health evaluation and forfeit his firearm rights.

Laitta’s attorneys argued he suffers from an untreated traumatic brain injury, which he incurred during combat in Afghanistan when his vehicle hit an IED. Laitta, who still serves in the National Guard, currently lives in Florida where he attends a master’s program for engineering.

The supply clerk who turned a blind eye as Liatta stole the device was indicted by a federal grand jury in November 2015. Keller Bellu faces charges of possession of stolen explosive materials and possession of an unregistered destructive device — both felonies, for which he is a fugitive at large with an active warrant signed by a U.S. Magistrate Judge.