NRA: "truth isn't fear mongering" when it comes to terrorism 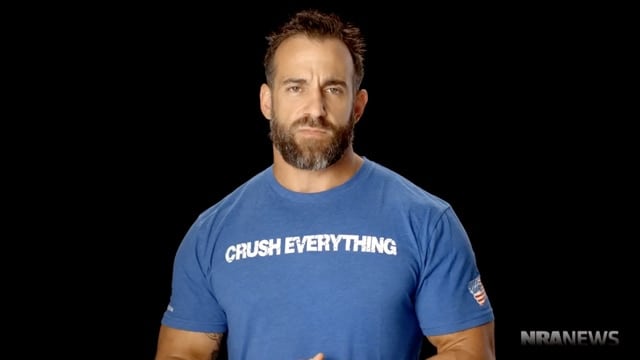 A new series of videos on NRA-TV insists “truth isn’t fear mongering” when it comes to talking about terrorism.

Two new videos were released Tuesday on NRA-TV’s YouTube channel, and both dealt with what they’re describing as “radical Islamic terror.”

In the first video, Dom Raso, a former Navy Seal, harangues President Obama for being weak and ineffective in the face of terrorism. “For eight long years we’ve watched in horror as our weak president allowed radical Islamic terror to fester, grow and spread across the globe,” Raso says.

Then Raso imagines what a president “who actually believes in the Second Amendment” might say to the American public. “America will not join the rest of the world in the fetal position at the feet of cowards who carry the flag of radical Islamic terror,” he says. “To every law abiding, able bodied man and woman, I urge you to get armed and trained immediately, and do your part to make America the most dangerous place on Earth to try to kill innocent people.”

In the second video, Raso goes after critics who say he’s fear mongering. “There’s a very real threat that we as Americans face on a daily basis. The threat of radical Islam coupled with the disarming of Americans by liberal politicians,” Raso says. “And yet, every time I bring this topic up, somebody inevitably tells me I’m just fear mongering. Me, a guy who’s witnessed firsthand what the threat of radical Islam is, and the horror it can inflict.”

Whether or not the threat is real, the fear is real. According to a Public Religion Research Institute study, most Americans are worried about terrorism. Nearly 75 percent of Americans say it’s a critical issue in a 2015 study, up from 53 percent in 2011.

The report also notes that 47 percent of Americans are very or somewhat worried that they or a family member will be a victim of terrorism — that’s up 14 percent from the year before. And 53 percent of Americans surveyed agree that American Muslims don’t do enough to oppose extremism in their communities.

Still, another study notes that 61 people have died in terrorist attacks in America since Sept. 11, 2001, and a Washington Post article from late last year notes that being crushed by furniture is a bigger risk for Americans than terrorism. But Raso insists he isn’t fear mongering.

“The threat is real, and it doesn’t care if you’re black, Asian, gay or straight. Ignore it, hide in your safe space and avoid reality, because this stuff doesn’t happen, until it does,” he says. “Every single day, millions of Americans buckle their seat belts when they get into their vehicles, not because they plan on getting into an accident, but because if they’re in one, it may save their lives. Is it fear mongering when you’re told to buckle up?”