'Saint' gets thumbs up from reviewers, questions from consumers 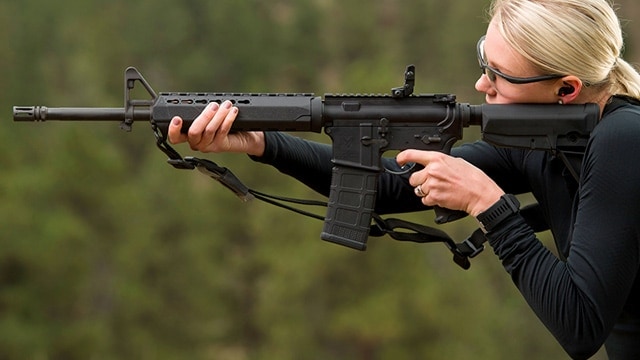 While Springfield is no newcomer in the world of firearms, the company accomplished a first this week — dipping its toes into the modular rifle world. Early reviews reveal the rifle is living up to the marketing circus preceding the Saint’s Nov. 1 launch, cleverly dropped on All Saint’s Day.

Though 15 reviewers from various mediums were brought out to Las Vegas to experience a sneak preview of the Saint alongside Springfield’s poster boys Rob Leatham and Rob Pincus, other reviewers got their hands on the new AR before it’s launch. The consensus? Springfield has outdone itself with its own take on the AR-15.

“There’s not a lot of differentiation to be had in today’s crowded AR market, but I think Springfield did a great job with the small details,” wrote Joe Kurtenbach of American Rifleman. “In fact, when I first saw the gun I commented that if I were to build a $1,000 AR, it would look very similar to the Saint.”

“After two solid days of non-stop shooting with the Saint, I can say that I like it. The rifle is all business,” said Tom McHale of Range365. “The receiver, barrel, and bolt carrier group all live up to Springfield Armory quality. You’ll find attention to detail throughout, even in places you don’t see.”

Concealed Carry Nation agreed that Springfield’s newest baby hit all the marks for a rifle competing in an already saturated market.

“The AR-15 rifle platform has been around for a long time and Springfield Armory definitely raises the bar with the Saint,” Concealed Carry Nation published. “Insofar as a concealed carrier needs a good solid home defense rifle, the Saint definitely hits all the caveats. I could also see the Saint being something that I would recommend to my own mother. It’s that reliable and accessible even for people who know little to nothing about firearms.”

Featuring a 16-inch Chrome Moly Vanadium barrel with a Melonite-coated exterior and 1-in-8-inch twist rate, the Saint is chambered in 5.56/.223. Springfield partnered with Bravo Company USA to outfit the rifle with decent, lightweight furniture bringing the weight down to around 7 pounds. The pairing also gave the Illinois-based company the ability to set a reasonable price point while still offering a few upgrades to other areas of the rifle — mainly the trigger.

Springfield Armory is known for producing decent triggers on its handguns and according to early reviews, it has carried that quality over to the AR platform. Nickel Boron and micro-polished, the trigger has a crisp, 6- to 7-pound pull with a clean and audible reset.

“Barring rifles that include an aftermarket trigger (AR Gold, AR Black, Geissele), the Saint has the best production AR trigger I have ever shot. That is nothing to sneeze at,” Clay Martin of GunsAmerica wrote.

In addition to what appears to be a killer trigger system, Springfield also developed their own sights. Aiming to give consumers a rifle that needs little configuration out of the box, the flip-up iron sights are thin and easily moved should shooters choose a mounted optic.

Ultimately, the Saint seems to be positioned to corner the new-to-AR market grabbing the attention of shooters who want an out-of-the-box experience.

“The Saint is targeted to a younger demographic of shooters who want a good ‘out of the box’ rifle but who don’t necessarily want to build up their own from scratch,” AllOutdoor.com said. “Springfield Armory is especially promoting this heavily to female shooters and some of the design decisions reflect this fact.”

The build-up to the Saint’s unveiling was nothing short of epic, with stylistically shot videos and photos teasing what Springfield promised to be “a new legacy.” Though some hardcore Springfield aficionados stood by the company’s latest addition, others felt the product didn’t quite live up to the aggressive marketing campaign.

“Yeah, I’m sure it’s a nice rifle. I’m just a bit underwhelmed after the months of hype,” Bill Parrish posted to Facebook. “Although I am glad it’s an actual firearm and not a line of workout gear or supplements or a fitness program as some had suggested.”

“Considering all the marketing hype, I was expecting a little more from SA than a late-to-the-party AR system with middy polymer furniture. It’s a sexy rifle, but with all the hype I expected a unicorn spitting pills made of awesome that will do my taxes,” Jason Wallentine wrote online.

Fanboys were quick to jump into the fray, defending the company and reminding haters that the rifle is aimed at newer shooters and Springfield owners.

“Wow! You guys are a tough crowd. I think these will sell quite nicely to loyal Springfield supporters,” posted Mike Farrell. “Sure, there are a lot of ARs on the market, but if you’re a Springfield guy like I am, then you’ll get it especially if you haven’t really shot one in a while like me.”

Jeffrey McKee questioned exactly what shooters were expecting from the company.

“Everyone seems to be upset that Springfield didn’t release a Ferrari,” McKee wrote. “I know plenty of people who this would appeal to. Springfield fans who never felt they needed an AR, but now want one due to the anti gun political climate.”

For Springfield and AR fans interested in adding the Saint to their collection, the mid-length rifle has already started shipping to retailers. With a MSRP of $899, Springfield Armory’s Saint is an affordable AR-15 option.