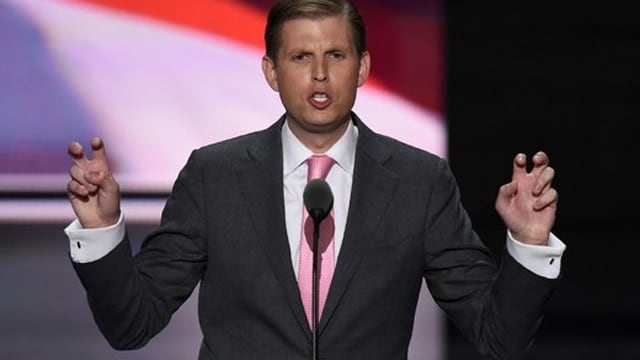 Eric Trump, one of Donald Trump sons,, putting something in air quotes during his speech at the Republican National Convention in July 2016. (Photo: Timothy A. Clary/Getty)

Eric Trump said in an interview Thursday that David Duke, a former leader of the Ku Klux Klan who has voiced support for presidential candidate Donald Trump, “deserves a bullet” as he agreed with a Denver shock jock.

“The guy does deserve a bullet. I mean, these aren’t good people. These are horrible people,” said Eric Trump about the white nationalist groups who have come out in favor of his father’s presidential bid.

Eric Trump defended his father, saying Donald Trump is the only Republican to discuss issues of black communities and has shared a willingness to fix those problems. In August, Donald Trump’s campaign reached a turning point when he said to African-American and Hispanic voters, “What do you have to lose?” if they voted for him.

While the Trump campaign has tried to include minority communities in the final months of the campaign, the love has not been reciprocated. National polls show Clinton ahead with an overwhelming majority of black and Hispanic voters.

Denver shock jock Ross Kaminsky, who interviewed Eric Trump for KHOW radio, argued Democrats created the characterization that the Trump campaign was a wing of the white nationalist movement.

Yet, many white nationalist groups have come out in support of Donald Trump as his immigration policies and tone toward minorities align with their own, but have acknowledged he would not return the favor.

In February, Donald Trump was heavily criticized because he failed to initially disavow Duke’s support for him. However, earlier this week, the Trump campaign was quick to rebuke the official endorsement from the KKK.

Gun control groups were quick to condemn the threat of violence and slam the Trump campaign.

“David Duke’s legacy is inarguably vile, but is this what we can expect from a Trump presidency? A bullet for anyone we disagree with?” the Brady Campaign wrote on Facebook while sharing the story.