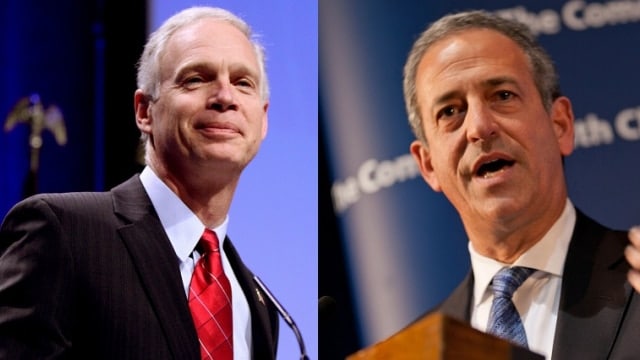 Republican U.S. Sen. Ron Johnson is being outspent by the man he replaced in office, now Democrat challenger Russ Feingold, in a tight re-election campaign where gun politics are a bone of contention.

Democrats need to keep their current seats and pick up four from Republicans to change control of the Senate and the contest between Johnson and Feingold is seen by many as a tossup. Johnson is currently the powerful chair of the Senate Homeland Security Committee and a stalwart when it comes to pro-gun votes in the chamber.

When speaking to CNN anchor Wolf Blitzer in the aftermath of the Pulse nightclub shooting that left 49 dead earlier this year, Johnson rebuffed arguments that AR-15 style weapons are part of the problem.

“So there are other ways that terrorists can slaughter people,” Johnson said. “It’s their ideology. Their ideology calls for the slaughter of innocents. That’s the root cause. It’s not law-abiding gun owners that are the problem here, it’s Islamic terrorists.”

Johnson doubled down on “radical Islamic terrorists” in his speech in July to the Republican National Convention, taking the opportunity to blast both Hillary Clinton and Feingold for being soft on terror.

The current fight for Johnson’s seat is the scene of big spending.

In 2010, Feingold spent $20 million as an incumbent against a challenge from Johnson — who dropped $15 million in comparison — only to lose the seat he had held since 1993. Since then, Feingold has been a special U.S. envoy to Africa for the Obama administration and has voiced support for the President’s executive orders on guns.

Eagerly seeking out of state funding in an attempt to move back into the Senate, the Democrat contender has drummed up $21.4 million so far this campaign, according to data compiled by the Center for Responsive Politics, again outspending Johnson.

When it comes to money from groups with gun control interests, however, the advantage goes to Johnson.

Feingold has received about $20,000 from Everytown this cycle while the National Rifle Association has contributed about $600,000 towards keeping Johnson in office. The NRA’s money has gone to ads simultaneously attacking Feingold on terrorism and contending that keeping the Johnson in the Senate to run interference against possible Supreme Court nominations from a potentially victorious Hillary Clinton may save the Second Amendment.

Feingold in October picked up a late endorsement from Americans for Responsible Solutions, the gun control PAC founded by former Congresswoman Gabrielle Giffords, though it does not appear that group throwing money into the ring in Wisconsin.

In his tenure in Congress, Feingold straddled the fence on guns on a few occasions, casting more pro-gun votes than your average Democrat, as reported by the Milwaukee Journal-Sentinel, but consistently picked up low ratings from the NRA. This election cycle, the gun rights group has graded him an “F” contrasted against Johnson’s “A.”

Johnson has also formed an “outdoorsman” coalition from some 400 prominent local sporting and gun rights advocates in Wisconsin that is supporting his reelection.

The latest data from poll aggregator Real Clear Politics shows Feingold ahead of Johnson by about five points.