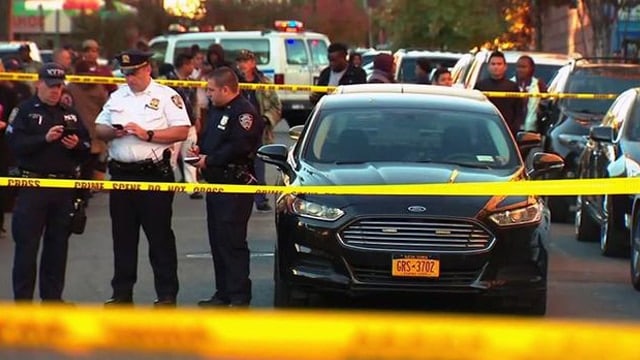 One NYPD sergeant is dead and another injured after a shootout in the Bronx. (Photo: WABC)

A shootout in the Bronx left one NYPD sergeant dead and another injured Thursday.

The officers were responding to a report of a home invasion, and pursued a red sport utility vehicle. They rammed it with their patrol car, and one officer approached the vehicle. That’s when Manuel Rosales, 35, opened fire, shooting the officer in the face with a .45-caliber semi-automatic handgun. The second officer opened fire on Rosales, and was hit in the leg before shooting and killing the suspect.

WABC in New York is reporting that Sgt. Paul Tuozzolo, 41, was shot and killed. A 19-year veteran of the force, he had two children. Sgt. Emmanuel Kwo, 31, has been on the force for nine years and is expected to recover.

Both officers were rushed to a local hospital where Tuozzolo died.

“(NYPD) Commissioner (James) O’Neill and I broke the news of Sgt. Tuozzolo’s death to his wife, his mother and his father,” said Mayor Bill de Blasio. “The NYPD will be with them, with their family, for as long as they need help for years and years to come. We will support that family.”

It’s the first NYPD officer to be killed in the line of duty since October 2015.