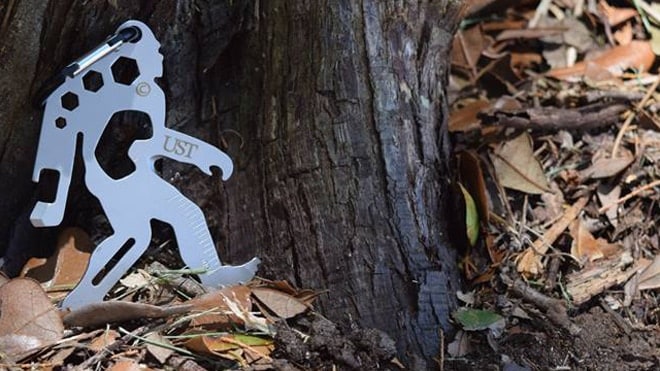 The Sasquatch tool by UST Brands. Is it a man tool or a tool man? (Photo: UST/Facebook)

The gun maker’s chief executive officer, James Debney, said “UST Brands is our first acquisition that is entirely focused on the outdoor market, which is a key part of our vision” to provide products for consumers interested in the trifecta: shooting, hunting and the outdoors.

According to the announcement, UST Brands grew its annual revenue by 49 percent from 2012 to 2015, and reported $24 million in revenue for the past 12 months.

Smith & Wesson’s chief financial officer, Jeffrey D. Buchanan, explained the gun maker will pay $32.3 million in cash for UST Brands along with an additional $2 million after closing later this month.

In September, Smith & Wesson reported $206.9 million in sales for its first quarter, a 40 percent increase from the year before, with accessories accounting for $14.5 million. Although the department saw a 17 decrease for the quarter, it performed better than expected overall in the previous fiscal year, raking in $15.3 million more than the $50 million initial estimate.

During a presentation to investors in January, Debney described Smith & Wesson’s longterm growth strategy by expanding into the broader outdoor-sporting goods market, valued at $60 billion, roughly four times larger than the U.S. gun industry. Competitor Vista Outdoor owns dozens of outdoor brands in addition to Savage Arms and a handful of ammunition companies.

UST is the most recent purchase for the gun maker, but analysts will likely predict more in the not too distant future. Lenders this week boosted Smith & Wesson’s credit limit to $500 million.