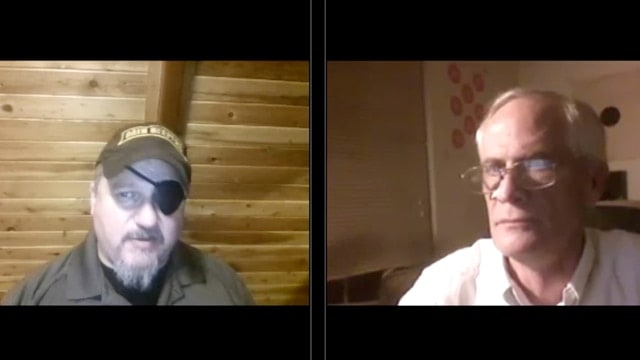 The scheduled 90-minute webinar lasted nearly three hours, as several presenters talked about a range of survival strategies. Speakers discussed surviving a riot, family preparedness, communication, what to carry with you in the event of a mass unrest scenario that forces you from your home, medical considerations and even details about improvised explosive devices — including what one might look like, and what to do if you encounter one (get away from it).

According to the group’s website, the Oath Keepers is “a nonpartisan association of current and former serving military, police and first responders, who pledge to fulfill the oath all military and police take to ‘defend the Constitution against all enemies, foreign and domestic.'” But the Southern Poverty Law Center, a progressive civil rights advocacy organization, has characterized the group as “anti-government.” In the media, members of the group have been called “far right extremists.”

The group rejects the “anti-government” label, and struggles with its far right reputation in the mainstream media and elsewhere — a fact evident in Thursday night’s webinar.

“As you all know, we launched what we call Operation Sabo, and the goal there is to attempt to suppress or mitigate the possible voter fraud, not suppress voting,” Rhodes said. “The leftist media is obviously…of course, smearing and twisting everything around. We’re sending our guys out incognito to look for criminal activity. Since the Project Veritas disclosures, it’s pretty obvious that, ya know, it only confirmed what we already knew.”

After Rhodes’ introduction, “Navy Jack” took over to give a “threat assessment” of different groups throughout the country that could instigate unrest. “We would anticipate that there will be protests of various levels of anxiety regardless of who wins,” he said.

Groups on Navy Jack’s radar include the Revolutionary Communist Party, the New Black Panther party, the Huey P Newton Gun Club, and La Raza, a group he calls “essentially a Hispanic supremacist organization.” There are also international threats, he said, like ISIS and al Qaeda.

Then Navy Jack made a prediction: “Donald Trump will probably be successful in his election bid, but not by a lot.”

“If the election is allowed to proceed, and I can’t say this strongly enough, if we have an election on Tuesday, which is most likely, this means that they think that Hillary Clinton will win,” Navy Jack said. “Fairly or unfairly, that’s what they think, that’s what they will believe if we do have an election. If they’re 100 percent sure she’s gonna lose, we’re gonna see events take place to try and slow things down.”

That’s when one of the 1,800 people who tuned in Thursday night spoke up. “I thought this presentation was supposed to be nonpartisan,” said Rhodes, reading the viewer comment aloud to Navy Jack. “To me it appears to be very Trump biased.”

“Whether you’re Republican or Democrat, whether you vote for Clinton or Trump, ya know, I personally…don’t care. I just want you to be able to vote,” said Navy Jack. “Whether Trump wins or Hillary wins, nobody should have their neighborhood torn apart.”

“It’s not our fault that it’s the Democrats that are actually caught on camera saying they’ve been bussing people in for decades to deal with you MF’ers (the Republicans) and we’re gonna keep doing it,” said Rhodes, who noted that he was against the Bush administration and is not a loyal GOP follower.

“We understand with both eyes open that we have an oligarchy that is the ruling class, the self appointed elites, who are ruling over us on both sides of the aisle,” Rhodes said. “We want to see them drain the entire swamp, not just the Democratic side. So just to make that clear.”

“I don’t make any assumptions about our listeners this evening. We’ve already offended one, thinking that we were for a particular candidate,” said John Karriman, another contributor on the webinar. “I’d venture to say that the majority of folks on here tonight, other than informants and agent provocateurs, really know that all we’re about is preserving our family and our way of life, and part of that is being able to vote our conscience.”

“As a group, Oath Keepers are, we’re fierce Constitutionalists, and sometimes that sets us at odds with the powers that be,” Karriman said.

The group’s concern over civil unrest isn’t without merit. According to CBS News, U.S. intelligence is warning of possible al Qaeda terror attacks in New York, Texas and Virginia on Monday, the day before Election Day.

“I doubt the Islamics particularly care who gets elected,” said Navy Jack during his threat assessment. “But if they could cause our election to be suspended, it would be a very big feather in their cap.”

The Oath Keepers will hold another webinar on Monday, the night before Election Day, to talk about the legality and illegality of martial law. “It’s not anywhere in the Constitution,” said Rhodes. “It’s illegitimate.”