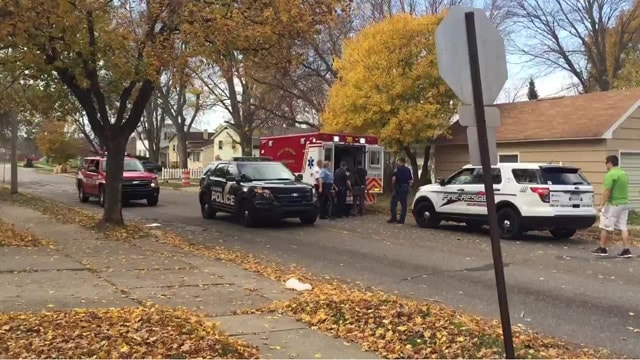 First responders gather at the scene following a burglary and shooting in Lansing. (Photo: WILX)

Eight Michigan teens are in police custody after breaking into a Lansing home Thursday morning only to be met by the armed homeowner.

Details surrounding the incident still remain rather scarce, but the Lansing Police Department confirmed with local media that there was an exchange of gunfire between the suspects and the male homeowner.

Two of the suspects were shot – one in the leg and the other in the shoulder – while the homeowner was uninjured. It’s unclear if all eight suspects entered the home or if some remained outside while others broke in.

One of the injured suspects was dropped off at the hospital by another suspect involved in the home invasion. The second injured suspect was found by law enforcement officers responding to the burglary call. He was located in a nearby wooded area close to an elementary school while attempting to hide in a tree. Both injured suspects were treated and released with non-life threatening injuries.

The remaining suspects were located through traffic stops and placed in custody within a few hours of the shooting. The suspects range in age from 13 to 18 years old, and authorities do not believe there are any remaining suspects at large.

The home invasion and subsequent shooting led to the lockdown of three nearby schools – Everett High School, Gardner Middle School, and Cavanaugh Elementary School. However, the students were dismissed at regular time, though sent home with caution.

Students who live in the Cavanaugh neighborhood, or otherwise close to where the shooting occurred, were not permitted to walk home alone and had to be picked up by a parent or guardian. Students who rode the bus home were escorted by school staff to the bus area, and all after-school activities at the high school were canceled. All three schools were back to their regular schedules the following day.